The Pew Research Center’s forum on Religion and Life today released its latest survey on the religious landscape in the US and they find that there are currently about 56 million religiously unaffiliated people in the US and they are the most rapidly growing group, jumping from 16.1% in 2007 to 22.8% in 2014. That is a huge increase. Non-Christian faiths showed a smaller increase over that same time period, from 4.7% to 5.9%. The big losers were Catholics (23.9% to 20.8%) and mainline Protestants (18.1% to 14.7%). Evangelicals have also dropped by about one percent.

There is an interesting feature about inter-religious marriages and its correlation with lack of religiosity.

Religious intermarriage also appears to be on the rise: Among Americans who have gotten married since 2010, nearly four-in-ten (39%) report that they are in religiously mixed marriages, compared with 19% among those who got married before 1960. The rise in intermarriage appears to be linked with the growth of the religiously unaffiliated population. Nearly one-in-five people surveyed who got married since 2010 are either religiously unaffiliated respondents who married a Christian spouse or Christians who married an unaffiliated spouse. By contrast, just 5% of people who got married before 1960 fit this profile.

There are also interesting data about age distribution. The unaffiliated are getting younger while Catholics and mainline Protestants are getting older. 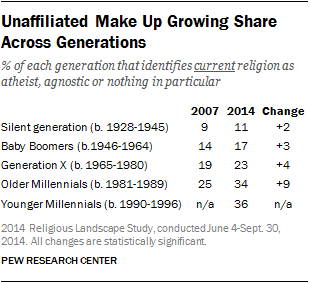 But this does not mean that the unaffiliated are growing simply because of generational displacement. The percentage of religiously unaffiliated is increasing across all age groups.

And the lesbian, gay, and bisexual community? They are by far the most unaffiliated.

Among respondents who identify themselves as gay, lesbian or bisexual, fully 41% are religiously unaffiliated, and fewer than half (48%) describe themselves as Christians. Non- Christian faiths also are represented in the gay community at higher rates than among the general public, with 11% of gay, lesbian and bisexual respondents identifying with faiths other than Christianity. (p. 87 of the full report)

All this is bad news for religion in the US. You can be sure that this survey is going to lead to much discussion in the media because these Pew surveys are very comprehensive and an authoritative source on the state of religion, targeting more than 35,000 adults aged 18 and older. Already I heard a promo today on NPR’s The Diane Rhem Show saying that tomorrow they were going to discuss the causes and consequences of declining religious affiliation in the US.