That is the finding of the 2015 survey on theState of Atheism in America by the Christian polling outfit Barna Group that puts atheists and agnostics under the common label of skeptics. They find five major shifts within the last two decades, as shown by this graphic. 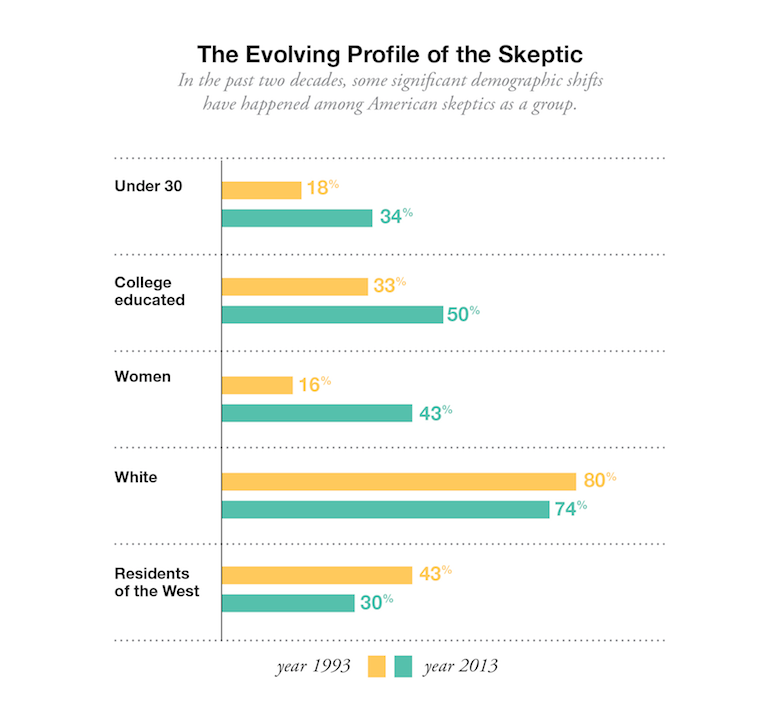 The report says that while the percentage of men who are skeptics has increased, that of women has increased even more thus closing the gap between the genders, a welcome development indeed.

As for the racial mix, the report says:

Religious skepticism has become more racially and ethnically inclusive. While whites represented 80 percent of all skeptics 20 years ago, that figure had dropped to 74 percent by 2013. This is largely a reflection of the increasing Hispanic and Asian adults among the skeptic cohort. Asian Americans, the least-Christian ethnic demographic in the United States, especially tend to embrace skepticism. While a growing number of skeptics are Hispanic, they still remain, along with Blacks, less likely than other ethnic groups to accept the idea of a world without God. White Americans, who constitute two-thirds of the country’s total population, are well above average in their embrace of atheism and agnosticism; they comprise three-quarters of the skeptic segment.

I find the increase from one-third to half of college graduates among the ranks of skeptics a little troubling. I would like skepticism to be increasing across the board and not be the province of just those who have more education and thus are likely to be better off. We already have enough divisions based on socio-economic factors.

Measuring religiosity is not easy and general questions such as “Do you believe in god?” are open to wide interpretation. The Barna Group has developed what they refer to as a post-Christian metric to fine-tune belief in terms of lack of commitment to religious beliefs and practices that are more amenable to measurement.

Based on Barna’s aggregate metric, nearly two-fifths of the nation’s adult population qualifies as post-Christian (38%). This includes one in 10 Americans who are highly post-Christian—lacking engagement in 80 percent or more of the measures of belief, practice and commitment. Another one-quarter is moderately post-Christian (28%), refraining from at least 60 percent of the factors.

The report adds that there are three components of disbelief.

Just as believers arrive at their belief in God by amassing a variety of information and experiences, skeptics piece together different inputs to draw their conclusions. According to our research, however, it seems the three primary components that lead to disbelief in God’s existence are 1) rejection of the Bible, 2) a lack of trust in the local church and 3) cultural reinforcement of a secular worldview.

Skeptics dismiss the idea that the Bible is holy or supernatural in any way. Two-thirds contend that it is simply a book of well-known stories and advice, written by humans and containing the same degree of authority and wisdom as any other self-help book. The remaining one-third are divided between those who believe the Bible is a historical document that contains the unique but not God-inspired accounts of events that happened in the past, and those who do not know what to make of the Bible but have decided it deserves no special treatment or consideration.

Given their antipathy or indifference toward the Bible, it is remarkable that six out of 10 skeptics own at least one copy. Most have read from it in the past, and a handful (almost exclusively agnostics) still read it at least once a month. The fact is, most skeptics have some firsthand experience with the Bible, and most had some regular exposure to it during their youth.

Actually, I do not find it that surprising that many skeptics own or read the Bible, at least from time to time. Skeptics tend to be quite familiar with the Bible, were often Christians in the past, and thus are likely to have a Bible somewhere around.

Calling for genocide as a good career move » « Milestone