(My mother Gnaneswari Singham, universally known by her childhood pet name of Podi, died on March 23, 2008 at the age of 83. A thanksgiving service was held for her at the Church of the Good Shepherd, Thimbirigasyaya. Colombo, Sri Lanka on Saturday, April 19, 2008, 5:30 pm. Below are two photographs of her, one taken in her late teens and the other in her mid-50s, along with my tribute to her given during the service.) 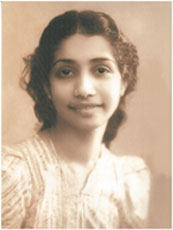 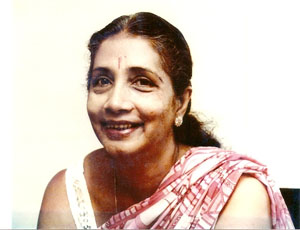 When my sisters Shanti and Rohini asked me to give one of the tributes to my mother, I wondered how I could condense a lifetime’s relationship with someone so special into a few minutes. I decided not to talk about her international championship quality bridge playing, which you all know about. I also decided not to talk about the thousands upon thousands of hours she spent volunteering on behalf of so many organizations, trying to make the world a better place by helping others in need.

I decided that rather than tell you a lot of stories about my mother, stories that can be multiplied many times by all of the people here whose own lives have touched her and been touched by her, I would instead dwell on what I learned from her attitude about the big questions of life and death.

We are all familiar from childhood with Aesop’s fable about the ant and the grasshopper. During the summer, the grasshopper sings and has a good time while the ant is busily building a home and storing away food for the coming winter. When winter comes, the grasshopper is cold and hungry and goes to the ant for help but the ant turns him away saying, “You sang all summer so now you can dance all winter.”

When children are told this story, they are supposed to admire the thrifty little ant and to deplore the grasshopper’s careless ways. But I must say that I always thought that the ant was a highly unlikable character. After all, what kind of person would turn away someone in dire need?

My sympathy for the grasshopper comes from my parents. If we think of the ant and the grasshopper as representing two extremes of behavior, my parents were definitely closer to the grasshopper than the ant. While they were not wasteful, my parents were more concerned with living fully here and now than preparing for the distant future. They never seemed to be too concerned about accumulating material wealth. And, most importantly, they never turned away other grasshoppers that came to them for help. My mother would always be willing to listen to those in need and try to help in any way she could.

My mother was a voracious reader, of newspapers, books, and magazines dealing with a wide variety of things so that you could carry on a conversation with her on almost any topic. I am not sure if she ever read the works of the philosopher Robert Ingersoll, but I am certain that she would have agreed with his philosophy of life when he said: “Happiness is the only good. The place to be happy is here. The time to be happy is now. The way to be happy is to make others so.” My mother lived according to that philosophy. She would try to help others be happy and then share in their joy.

I also learned from my mother the importance of being kind and friendly to others and treating everyone, without exception, with respect. It was a source of humor in our family that irrespective of what part of the world she was in, any time she was seated next to someone for more than five minutes, in a waiting room, on a train or bus or plane, whoever that person was or from whatever station in life, she would strike up a conversation and pretty soon they would be laughing together like old friends.

I learned from her that it is a waste of time whining to others about your own problems because they have problems too. It is better to just face up to whatever hand that life gives you, deal with it as best as you can, and then move on. Life is too precious to be spent on self-pity, and constantly complaining about your own misfortunes doesn’t get you anywhere.

I think that it was this lack of self-absorption that attracted people to her. Here is one example. When I became seriously ill with polio at the age of six, my parents immediately set about trying to do the best for me which involved taking me to England for medical treatment as soon as possible. Since my father could not go immediately due to work demands, my mother by herself took my sisters and me to England to start my treatment. Imagine, back in the 1950s when overseas travel was a daunting challenge, here was a thirty year old woman setting off to a strange and distant country requiring a month long sea voyage, while taking care of three young children, one of whom was very sick and barely able to walk and another who was a one year old infant.

But almost immediately, my mother made many friends on that ship and pretty soon she had an army of volunteers eager to help her. For example, she told me that she would put our clothes in the washing machine in the laundry room and then go back to the cabin to take care of us. But when she returned later to complete the chore, she found that another passenger, a stranger, had taken all the clothes out of the washer, and dried, ironed, and neatly stacked them, because that person has seen that my mother had her hands full. Other people would volunteer to take care of her children for hours on end so that she could enjoy the voyage more, and my mother became a fixture at the captain’s table. The friends she made on that trip remained friends all her life.

Just as she was always willing to help others, people helped her in all manner of ways. They did not do this out of pity. People enjoyed helping her because rather than being self-pitying or mournful, she faced up to life’s challenges cheerfully. Her positive attitude to life, her graciousness, and her playful, even occasionally mischievous, good humor seemed to bring out the kindness and goodness in others.

Her attitude to death, like her attitude to life, was also very matter of fact. She saw death as part of the cycle of life and did not fear it. When I was in Sri Lanka in January, she and I spent many, many hours just talking. In most of our conversations, we recalled all the good times that we had shared. But we also spoke about death and she did not shy away from this topic that people tend to avoid, even though she sensed that it was imminent. My mother was a smart woman. She knew what the recurrence of her cancer meant. She knew that while surgery was unavoidable, it carried with it serious risks. But she reassured me many times that she was not afraid. She said that she had had a long and good life. She had done so much, traveled to so many places, seen so many things, had such good health until the very end, made so many friends, experienced so much of the richness of life that to wish for even more, to ask that it be extended indefinitely, was to be greedy and ungrateful. She said (using a metaphor from cricket, a sport of which she was a big fan) that she had had a very good innings and if the match was to end, then so be it.

Her faith in god undoubtedly played an important role in her ability to face death so matter-of-factly. She told me that she believed that god would not give her a challenge that she could not meet and so she had put her life in god’s hands and was ready for anything.

Richard Dawkins begins his book Unweaving the Rainbow by saying: “We are going to die, and that makes us the lucky ones. Most people are never going to die because they are never going to be born.” My mother would have agreed with him that we, all of us, are lucky just by virtue of having experienced life.

My parents, the grasshoppers, did in the end accumulate a lot of wealth. But it was not in the form of money or possessions. Their wealth took the far more valuable form of rich life experiences, precious memories, and treasured friends.

To the end, my mother was preparing us to not be sad when she died, typically worrying more about our happiness and welfare than her own. I know that she would want us to celebrate her life, not to mourn her death.

I would like to thank all of you here for being a part of that life. I know that all of you meant a lot to her. Each one of our lives is a thread that she used to weave the glorious tapestry of her own life.

We are all lucky to be alive and to have lived. Although we miss her terribly, I know I also speak for my sisters when I say that that the three of us had an extra share of luck to have had such a kind, generous, fun-loving, and altogether wonderful person as our mother.

Neoconservatives, Al Qaeda, and Curveball » « The propaganda machine-15: The armies of the right