What’s a Canadian to do in honour of Juneteenth? In school I learned we were the end point of the underground railroad, which ferried slaves out of the USA in the decades before their Civil War. And, well, that was about it. Yay Canada! I guess we never engaged in slavery.

A moment’s thought suggests that is nonsense. Britain did indeed ban slavery before the USA, but even my decaying history knowledge tells me that happened in the 1800’s, about two hundred years after the Brits landed. The Atlantic parts of Canada were heavily engaged in shipping, so there’s a non-trivial chance slave ships landed there in passing at least. If only we had some historical documentation about the subject.

As a matter of fact, we do.

Slavery occurred in the provinces that today that are known as Ontario, Quebec, New Brunswick, Nova Scotia, Prince Edward Island and Newfoundland. So, from Ontario eastward. The scale in terms of the number of people enslaved was smaller than tropical or semi-tropical places like the American South or an island colony like Jamaica or Haiti, and places in South America, like Brazil.

Why? Because in those tropical or semi-tropical regions, they could sustain plantation agriculture all year round. Because it was a warm climate, they didn’t have cold winters that would kill the crops.

Often I find in people who want to minimize slavery in Canada (the assumption) that a smaller number of enslaved people necessarily meant better treatment. They want to assume that white slave owners in Canada must have been kinder and gentler, because they enslaved less people. They don’t understand that was a totally economical rationale; they didn’t need as many labourers, so they didn’t enslave as many people.

That doesn’t mean that they didn’t subject them to very cruel and unusual types of corporal punishment. We know that they did, they’ve left evidence of that in the archives. 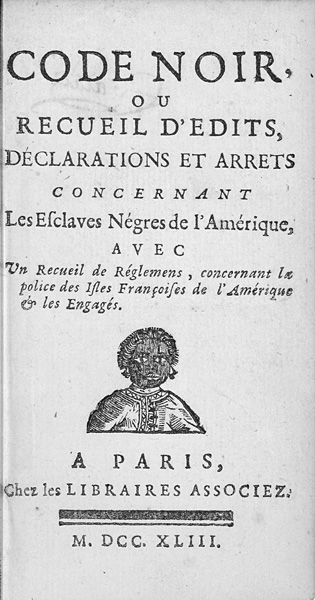 There were no laws explicitly permitting slavery, but in a lawless frontier where the newcomers hailed from slave-owning countries there was little need for them.

The first documented black slave arrived in Quebec city in 1628, just twenty years after the founding of New France. The boy, from Madagascar, was given the name Olivier Le Jeune. He was sold by a British commander to a French clerk. He was about six-years-old.

Though present from Olivier onward, slavery was officially illegal in French colonies until 1685 when King Louis XIV’s Code Noir allowed slavery for “economic purposes,” a policy extended to New France in 1689 in response to colonist complaints about a lack of servants.

The Black Code placed strong restrictions on what slaves could do.

Article XVI. We also forbid slaves who belong to different masters from gathering, either during the day or at night, under the pretext of a wedding or other excuse, either at one of the master’s houses or elsewhere, and especially not in major roads or isolated locations. They shall risk corporal punishment that shall not be less than the whip and the fleur de lys, and for frequent recidivists and in other aggravating circumstances, they may be punished with death, a decision we leave to their judge. We enjoin all our subjects, even if they are not officers, to rush to the offenders, arrest them, and take them to prison, and that there be no decree against them.

The “fleur de lys” mentioned above was identical to the brand placed on cattle, but applied to human beings instead. If you’re wondering what it looks like, there’s four of them on Quebec’s flag and six on Canada’s official Coat of Arms. All Canadians have seen symbols of our slave-owning past, and never known about the connection.

“Slave ownership was found at every level of colonial Canadian society, whether French or English, working on farms, in bakery shops, working in leather tanning, slave orderlies working in hospitals, working for merchants, working in the fur trade as slave canoe paddlers for Scottish and French Canadian fur traders crisscrossing the country,” says [George] Tombs.

Ironically, when the US state of Vermont banned slavery Canadian slaves fled across the border to the USA to escape enslavement. We even have our own heroes of the resistance, such as Marie-Joseph Angélique.

On the evening of Saturday 10 April 1734, a large portion of Montréal — the merchants’ quarter — was destroyed by fire. At least 46 buildings, mainly homes, were burnt, plus the convent and hospital of the Hôtel-Dieu de Montréal. Angélique was accused of starting the fire and arrested by police on 11 April. She was taken to court the following morning, where she was charged with arson, a capital crime punishable by death, torture or banishment. In the French legal system of the 18th century, the accused was presumed guilty, and in New France, there were no trials by jury, only inquisitorial tribunals in which the defendant was meant to prove her innocence. Lawyers were banned from practicing in the colony by Louis XIV. […]

After a six week tribunal, Angélique was found guilty and sentenced to death. She was to have her hands cut off and be burned alive. The sentence was appealed to the superior court in Québec City, where the death penalty was upheld and the gruesome aspects of the sentencing lessened. Angélique would be tortured, hanged, and then her body burned. She returned to Montréal to await her death. Throughout her trial, at both the lower court in Montréal and the upper court in Québec, she denied setting the fire.

Why don’t Canadians learn of this history? Partly, that’s because it is easier to focus on the USA’s much larger slave population. The US also did a much better job of documenting their slave trade than we did.

What [Charmaine] Nelson calls our “strategic ignorance,” harks all the way back to slave-owners themselves, whose selective diaries were replete with euphemisms like “servants” and extended family.

The slaves themselves were silenced. They worked so hard that they died at 20 years old or so. If ever they had time to collect their thoughts, they could scarcely record them for posterity. Masters often prohibited them from speaking their own languages. They stripped them of their original African and Indigenous names, and assigned French and English names, effectively wiping out their identity.

Now a small but growing number of scholars is unearthing court records, local registries and a host of archives to get a glimpse into the less luminous chambers of our past.

All the Canadians in the building should take a bit of time this Juneteenth and read up on our own history of slavery. Don’t bury the past in yet another mass grave.

Every year the Black Coalition of Quebec organizes a grim pilgrimage to an unmarked grave. About an hour from Montreal outside the village of Saint Armand, close to a dozen slaves are said to be buried near a large whale-shaped boulder. […]

Ploughing these fields in the 1950s, a farmer’s tractor ground to a halt — on human bones.  Elsewhere, they might have been studied and carefully preserved. But these remains were tossed aside and lost. Oral history has it that they are the bones of the Luke family slaves. This is backed by the preliminary findings of Quebec anthropologist Roland Viau.

Once pointing to these vast rolling fields was a sign that read “Negro Cemetery.” It too is now gone. The sign was removed, replaced, and removed again, as though to extirpate the remnants of an embarrassing past.