Consider this scenario, instead.

YOU: I’m in the mood for a soft drink. What do you have?
ME: Just Coke and Pepsi, at the moment.
YOU: I’ll take a Coke.
ME: Here’s a Pepsi.
YOU: I thought you said you had Coke?
ME: Oh I do, you just look more like a Pepsi person to me.

This time around, it’s pretty obvious I’ve done something unethical. Given the choice of providing you with what you wanted, I instead imposed something else on you. Both alternatives carried about the same cost to me.

Now transpose the scenario from soft drink preference to chosen pronouns. It doesn’t quite map on, because while many societies have insisted on binary pronouns, we’ve either guessed or known sex isn’t that simple for thousands of years. To be more accurate, I should have used three soft drink choices, though even that might not be sufficient as “intersex” is a “none-of-the-above” category that hides a rich diversity.

That’s not a big deal, because the number of categories doesn’t matter. The core of the argument is that most of us memorize more than just a person’s name. I’ve met PZ Myers, so I know his name is “PZ Myers,” and from his outward appearance I’ve assigned him to the “male” category. For the most part, that just changes which words I use to refer to him in the third person, as in English some pronouns are gender-specific (it’s worse with other languages, such as French where even words like “equation” are gendered). I might combine that with how our society has gender-specific knowledge, and make a few guesses about what PZ has experienced, but I try to remind myself that those really are guesses that can easily slip into stereotypes. After all, I’ve been shown how to hold my keys for self-defense, and that’s usually a gender-specific thing.

I do this memorization for everyone. Swapping one mental category for another carries trivial cost to me. If I do pay a penalty, it’s almost certainly because I stereotyped someone and was called out for it.

So when someone asks me to use a different set of pronouns, why would I ever refuse? I have never found anything approximating a reasonable reason. The lack of a good reason is why misgendering someone on purpose is a giant red flag. 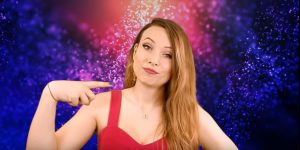 According to her YouTube bio, Katy Montgomerie “is a feminist, LGBT rights advocate, atheist, metalhead, insect enthusiast and trans woman”. She’s been on The Atheist Experience, was featured on the news, and has been an outspoken critic of TERFs. I haven’t watched a lot of her output, but does it matter? There is no “shitty person” excuse for ignoring someone’s chosen pronouns. Nor is her appearance an excuse, either; I deliberately chose a screenshot where Montgomerie looks extremely femme, but it wouldn’t matter if she was instead sporting a beard, short hair, and soft-spoken Midwest accent. She has indirectly asked me to use she/her pronouns, it costs me nothing to use them, so why would I ever refuse?

Bigotry. There’s no need to dance around it: Ophelia Benson is still a bigot, and what was once something she tried to hide, then was confined to transgender athletes, has now metastasized onto any transgender person that appears on her radar.