You may be shocked to hear someone with “Rational” in their username wasn’t being rational. I know, right?!?! Fortunately, EssenceOfThought are on top of it, in video form.

While there’s some overlap with what I’ve written, they make some points I wasn’t aware of. For instance, transgender women are forced to compete with hormone levels at or below the levels of a typical cis women. But they’re not competing against the typical cis woman, they’re competing against cis women who have been selected for unusual athletic performance. Emphasis mine:

Hagmar et al. reported an overrepresentation of polycystic ovaries in female Olympic athletes (37% vs. 20% in the general population). This polycystic ovary syndrome subgroup showed a higher T concentration and free androgen index than those observed for regularly menstruating or non- polycystic ovary syndrome Olympian athletes. Our group reported, among an elite female athlete population, a prevalence of hyperandrogenic 46 XY DSD individuals, which is approximately 140 times higher than expected in the general population. Lastly, monitoring performances obtained from hyperandrogenic DSD female athletes before and after they had their T levels lowered within the normal female range is a valuable and unique source of information to study the effects of androgens on female athletic performance In these individuals, reducing T level from the normal male range to the normal female range led to an average decrease of their best chronometric performance of 5.7% over a 2-year period.

Transgender women’s athletes have a competitive disadvantage to their cis peers! EssenceOfThought also cover an angle I’d forgotten: women tend to have a lower concentration of hemoglobin in their blood than men, which in theory limits the amount of oxygen they can deliver to their muscles. How does transitioning effect that? 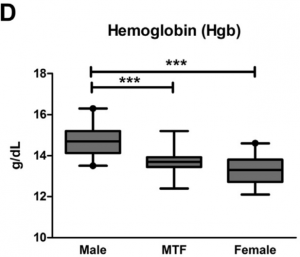 While EssenseOfThought don’t bring this up in their video, a sharp commenter over there pointed me towards Patricio Manuel.

The Los Angeles Times started documenting his journey early on, and he quickly suffered major consequences. His long-time gym no longer wanted to be associated with him if he was going to be openly trans, he recalled, and he lost his coach in the process. […]

Transition, including taking hormones and undergoing gender-affirming surgery, changed his life for the better. But it also brought new uncertainty: Would he ever be able to go pro? […]

But but but the transphobes assured me that birth sex was destiny, that men born as men would always be stronger than women born as women. And yet here’s a transgender man, competing in boxing no less, scoring a victory in his first pro match! Compare that to fifteen years of Olympic competition, where zero transgender women have placed first. If anything, we seem justified in concluding birth sex has little-to-no effect on athletic ability.

One flaw in EssenseOfThought’s video (and my own writing, to be fair), is an assumption that hormone levels correlate with success in sports. The underlying idea is that more testosterone = more muscle = better performance. 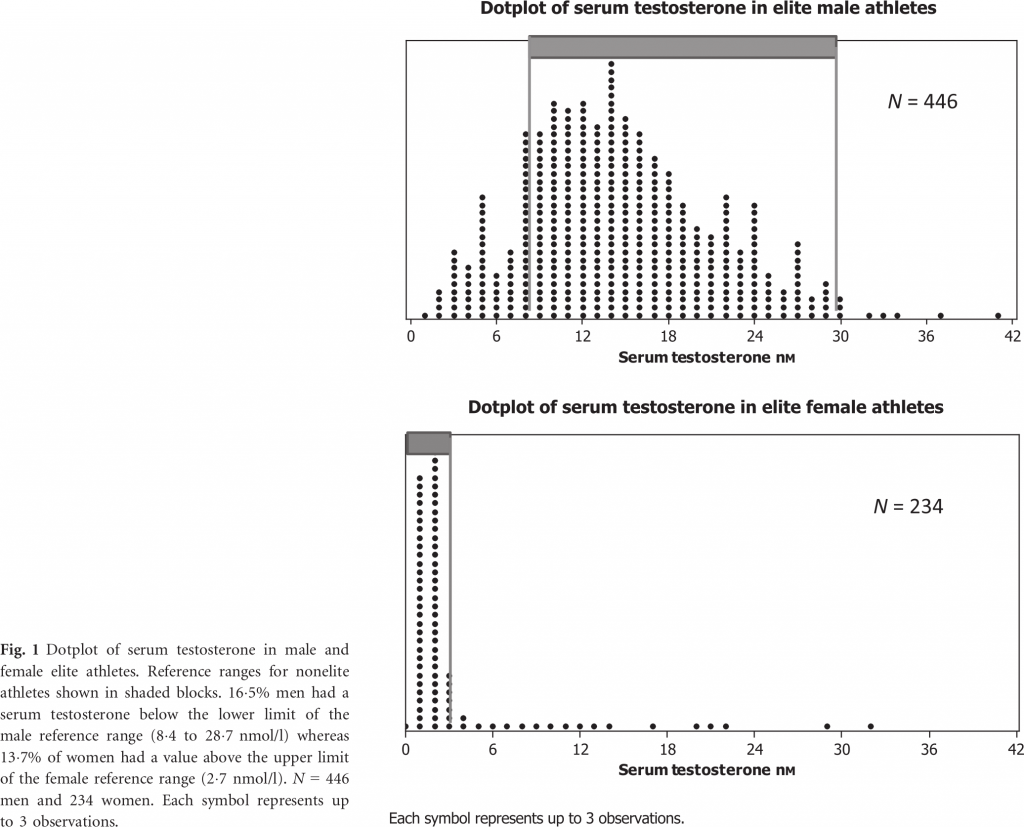 Saying that men typically have higher testosterone concentrations than women is technically true, but sweeps under the rug the tremendous variation in the former’s level of testosterone. If hormones truly were destiny, we should see ridiculous variation in men’s performance. We don’t. In fact, as the caption says, 16.5% of male athletes had a lower concentration of testosterone than we typically expect from men. And yet, that didn’t stop these men from being elite athletes! The relation between performance and testosterone is clearly nonlinear; the modal concentration for men is seven times greater than the modal concentration for women, yet men are not seven times better, even in sports where strength and size should play a dominant role.

These are all FACTS that I can back up with all of the latest scientific data. Evidence shows us that there is NO RELATIONSHIP between athletic performance and endogenous testosterone (there is a relationship between *exogenous* testosterone, though, which is why it’s doping).

Rachel McKinnon’s claim, as outlandish as it sounds, is actually on good scientific ground. The above study is the first she throws out, but she has more where that came from. Emphasis mine.

At best, athletes swimming in testosterone have a minor advantage. Those athletes are rare, and in the general case an athlete’s testosterone level tells you nothing about their performance. So anyone using hormone levels to argue for or against including transgender athletes is relying on a falsehood.

Even with that flaw, EssenceOfThought’s video is damn good. Be sure to click through for the transcript, too.

Sexism Poisons Everything » « The “Summary” That Wasn’t