That black hole image was something, wasn’t it? For a few days, we all managed to forget the train wreck that is modern politics and celebrate science in its purest form. Alas, for some people there was one problem with M87’s black hole. 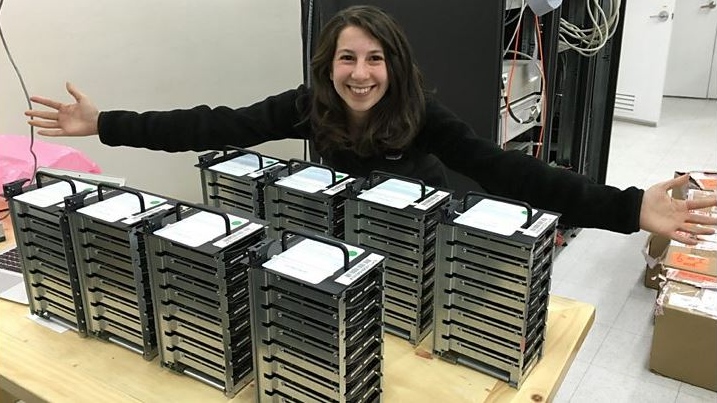 A woman was involved! Despite the evidence that Dr. Bouman played a crucial role or had the expertise, they instead decided Andrew Chael had done all the work and she was faking it.

So apparently some (I hope very few) people online are using the fact that I am the primary developer of the eht-imaging software library (https://github.com/achael/eht-imaging…) to launch awful and sexist attacks on my colleague and friend Katie Bouman. Stop.

Our papers used three independent imaging software libraries (…). While I wrote much of the code for one of these pipelines, Katie was a huge contributor to the software; it would have never worked without her contributions and

the work of many others who wrote code, debugged, and figured out how to use the code on challenging EHT data. With a few others, Katie also developed the imaging framework that rigorously tested all three codes and shaped the entire paper (https://iopscience.iop.org/article/10.3847/2041-8213/ab0e85…);

as a result, this is probably the most vetted image in the history of radio interferometry. I’m thrilled Katie is getting recognition for her work and that she’s inspiring people as an example of women’s leadership in STEM. I’m also thrilled she’s pointing

out that this was a team effort including contributions from many junior scientists, including many women junior scientists (https://www.facebook.com/photo.php?fbid=10213326021042929&set=a.10211451091290857&type=3&theater…). Together, we all make each other’s work better; the number of commits doesn’t tell the full story of who was indispensable.

Amusingly, their attempt to beat back social justice within the sciences kinda backfired.

As openly lesbian, gay, bisexual, transgender, queer, intersex, asexual, and other gender/sexual minority (LGBTQIA+) members of the astronomical community, we strongly believe that there is no place for discrimination based on sexual orientation/preference or gender identity/expression. We want to actively maintain and promote a safe, accepting and supportive environment in all our work places. We invite other LGBTQIA+ members of the astronomical community to join us in being visible and to reach out to those who still feel that it is not yet safe for them to be public.

As experts, TAs, instructors, professors and technical staff, we serve as professional role models every day. Let us also become positive examples of members of the LGBTQIA+ community at large.

In the light of the above statements, we, your fellow students, alumni/ae, faculty, coworkers, and friends, sign this message.

Yep, the poster boy for those anti-SJWs is an SJW himself!

So while I appreciate the congratulations on a result that I worked hard on for years, if you are congratulating me because you have a sexist vendetta against Katie, please go away and reconsider your priorities in life. Otherwise, stick around — I hope to start tweeting

more about black holes and other subjects I am passionate about — including space, being a gay astronomer, Ursula K. Le Guin, architecture, and musicals. Thanks for following me, and let me know if you have any questions about the EHT!

If you want a simple reason why I spend far more time talking about sexism than religion, this is it. What has done more harm to the world, religion or sexism? Which of the two depends most heavily on poor arguments and evidence? While religion can do good things once in a while, sexism is prevented from that by definition.

… Whoops, I should probably read Pharyngula more often. Ah well, my rant at the end was still worth the effort.