We watched Glass Onion this weekend. It’s good, entertaining, a little bit off-kilter compared to most whodunnits, and expresses a contemporary point of view that’s clearly becoming more common. Most of the cast are playing the true detritus of society — influencers, fashion models, vapid sportsball types, etc. — and most of them aren’t very likeable. They’re spending a weekend at an extravagantly appointed Greek island that a ridiculously rich posturing fool, Miles Bron, had purchased, when, of course, murder occurs, and the brilliant detective Benoit Blanc has to figure out who the killer is. The key to the case is when he realized that he had assumed, like everyone else, that Miles Bron was a complicated genius. After all, he’s very very very rich. But the break in the case comes when he realizes that…Miles Bron is an idiot.

As were most of the people at this party. That’s not really a spoiler, because early on you should realize yourself that most of the likely killers are stupid and superficial. 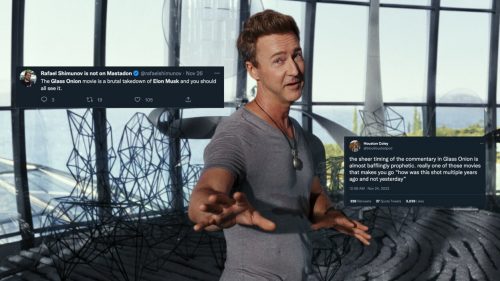 You’ll probably also instantly recognize Miles Bron as a proxy for Elon Musk. Tech billionaire who clearly doesn’t understand anything? Elon Musk. Elon has become an archetype! Lots of people have noted that resemblance, but it’s not quite true (warning: there are actual spoilers at that link).

It all makes Miles Bron the perfect villain for 2022: a tycoon far dumber than he realizes.

Thanks to recent headlines, for many viewers, Bron’s mixture of bluster, hubris and half-baked ideas will likely bring to mind Twitter owner and part-time car enthusiast Elon Musk. But, as Norton has noted, he and writer-director Rian Johnson based Bron on multiple (unnamed) real-life billionaires and tech figures, not one specific person. The movie’s root conflict — Bron’s ouster of Helen’s sister Cassandra (Monáe) from the company they co-founded based on Cassandra’s idea — evokes Mark Zuckerberg’s battles in building Facebook. His proselytizing for a not-ready-for-prime-time technology — in this case, an unstable hydrogen fuel — recalls Elizabeth Holmes. His wardrobe of T-shirts and necklaces suggests Sam Bankman-Fried and other casually attired entrepreneurs.

Like all these figures, Bron is utterly convinced of his own genius. He speaks passionately of being a “disrupter.” He portrays himself as an innovator, even though he stole his co-founder’s ideas. His island is only accessible via a glass dock that looks impressive, but is only accessible at low tide, with the local police referring to it as a “piece of s—.” He brushes aside warnings that his hydrogen fuel is too unstable — heedlessness that literally blows up in his face.

This is a promising cultural shift, that many people are coming around to the realization, like Benoit Blanc, that billionaires are just greedy, wicked, dumbasses. It’s the one good thing Musk has accomplished.

Scroogey. Very scroogey. » « I had to say what I think of Jesus Mythicism