The central character on the internet for the last few days has been Andrew Tate, macho posturing kickboxer and sleaze merchant, previously banned on Twitter but allowed back on by Elon Musk (of course). He was recently mocked by, of all persons, Greta Thunberg, who teased his “small-dick energy”, followed by Tate making a video bragging about all his expensive cars, thereby proving her point. This was quickly followed by the Romanian police busting in and arresting Tate, purportedly tipped off by the box for a local pizza delivery site letting them know where he was (I don’t really believe this — the police knew where he was, and already had a case against him.) 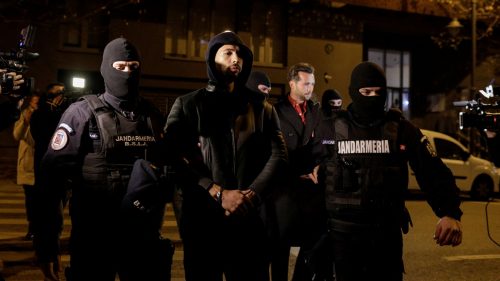 Until you read what the Romanian police charged him with.

Following the communique no. 1 of 12.04.2022 and the interest shown by media representatives, the Information and Public Relations Office within the Organized Crime and Terrorism Investigation Directorate is empowered to bring the following to public attention:

On 29.12.2022, the prosecutors of the Directorate for the Investigation of Organized Crime and Terrorism – Central Structure together with police officers from the Bucharest Organized Crime Brigade implemented 5 home search warrants in a case in which investigations under the aspect of committing the crimes of constituting an organized criminal group, human trafficking and rape.
In the case it was noted that, at the beginning of 2021, 4 suspects (two British citizens and two Romanian citizens) constituted a criminal group organized in order to commit crimes on the territory of Romania, but also of other countries, such as the United States of America and Great Britain, of the crime of human trafficking.
Victims were recruited by British citizens by misrepresenting their intention to enter into a marriage/cohabitation relationship and the existence of genuine feelings of love (the loverboy method). They were later transported and housed in buildings in Ilfov county where, by exercising acts of physical violence and mental coercion (through intimidation, constant surveillance, control and invoking alleged debts), they were sexually exploited by group members by forcing them to perform demonstrations pornographic for the purpose of producing and disseminating through social media platforms material having such a character and by submitting to the execution of a forced labor,
So far, 6 injured persons have been identified who were sexually exploited by the organized criminal group.
With regard to the crime of rape, it was noted that, in March 2022, an injured person was forced, on two different occasions, by a suspect through the exercise of physical violence and psychological pressure to have sexual relations.
At the headquarters of the Directorate for the Investigation of Organized Crime and Terrorism – Central Structure, 4 people who are reasonably suspected of being involved in criminal activity were taken for questioning. Following the hearings, the prosecutors of the Directorate for the Investigation of Organized Crime and Terrorism – Central Structure ordered the 4 persons to be detained for a period of 24 hours.
The activities were also attended by police officers from the Ilfov Organized Crime Service and the Service for Combating Human Trafficking, as well as gendarmes from the Special Intervention Brigade of the Gendarmerie.
We make it clear that during the entire criminal process, the investigated persons benefit from the procedural rights and guarantees provided by the Code of Criminal Procedure, as well as the presumption of innocence.

[translated from the original Romanian]

Jesus fucking christ. Not funny at all. Tate and his brother were luring women into their grasp, imprisoning them, using them to make internet pornography, and raping them. And people have been idolizing him? If convicted, I hope they spend many years in a Romanian prison; if not convicted, please let this be the end of Tate’s reputation as a man to emulate. He’s a cowardly abuser of women and a rapist.