Well, the Republicans did it again. 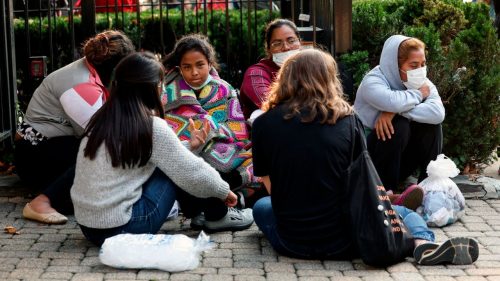 Some of the migrants that arrived had to battle the 18-degree weather wearing only t-shirts, according to CNN, and they were eventually given blankets and taken to local shelters in the area.

I’m not sure what game they’re playing. Is it “Be cartoonishly villainous”? Is it “Let Democrats be humane and kind”? Whatever game it is, could they please stop using innocent human beings as their pawns?

It seems the most likely asshole behind this cruel stunt is, of course, the governor of Texas. He isn’t issuing any denials, which is a little bit damning, and he isn’t claiming credit, because he knows it’s wicked. He probably spent his childhood pulling the wings off flies and hiding the evidence from his mom.

The White House placed the blame on Texas Governor Greg Abbott, who has sent busses of migrants to northern cities in the past, though it has not been confirmed that Abbott send the buses that wound up at Harris’ residence. In a statement, the White House called the deployment of the buses a “cruel, dangerous and shameful stunt.”

Somebody needs to explain to the Republicans that the callous factory owners and poor house managers in Dickens novels were the bad guys.