I hope all the gun-fondlers have tissues at hand, because they’re probably going to need some cleanup. The rest of us are going to need puke buckets.

Recently, Sig Sauer won a huge military contract to provide the next generation of squad weapons. These will be the replacements for the existing M4 and SAW. They will be better at punching holes in people! I guess that’s what you want for the military. 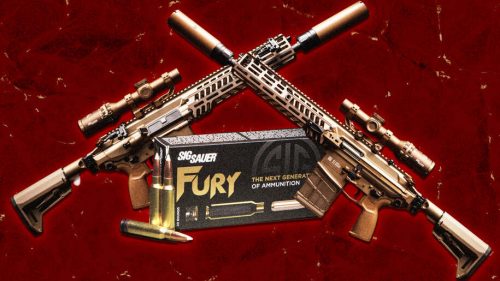 The SIG-LMG lightweight belt-fed machine gun and SIG MCX-SPEAR Rifle are purpose-built to harness the energy of the SIG FURY 6.8 Common Cartridge Ammunition enabling greater range and increased lethality while reducing the soldier’s load on the battlefield. Both the SIG-LMG and MCX-SPEAR deliver significant weapon and technology advancements to the soldier and provide a solution for battlefield overmatch in comparison to the current M249 and M4/M4A1.

FOR THE FUCKING MILITARY. Sig Sauer, evil hell-sucking demon corporation that it is, is not satisfied with the billions they’ll get from the army, so they have also announced a civilian version of the weapon. Because we need it, apparently.

“It’ll shoot through almost all of the bulletproof vests that are worn by law enforcement in the country right now,” said Ryan Busse, a former firearms company executive who is now a senior policy analyst with the Giffords Law Center and author of Gunfight: My Battle Against the Industry that Radicalized America.

I am no fan of the cops, but I don’t think selling a cop-killer is a good idea. I also don’t want to imagine what this thing could do to small children. I suspect it won’t be long until we find out.

The only saving grace here is that the thing costs $8,000. That will not deter any of the fanatics, unfortunately. Of anyone planning to buy one, I have to ask…what the fuck is wrong with you, sicko?

We’re not done with news from the hellscape, though.

All the people who laughed off the “worrywarts” years ago for freaking out about the Funny Dancing Robot Dogs ™ should be forced to watch this video once a day for the remainder of the year. pic.twitter.com/WBIrlGah3w

Somebody suggest to one of the reality TV shows that moving a team of MAGA-hat-wearing, Confederate-flag-waving yahoos who have bought an MCX-SPEAR into some desolate wasteland somewhere where they have to fight Funny Dancing Robot Dogs to the death. I wouldn’t watch it, and I wouldn’t want to guess who’d win, but I’d be hoping for mutual extermination.

Is Cody spying on me? » « An important lesson