There is a spider, Araneus mitificus, AKA the Kidney Garden spider, that sort of vaguely resembles the mascot (?) of Pringles potato chips. Surprisingly, the Kellog company, which markets Pringles, has embraced this idea and want to make the name “Pringles Spider” official. 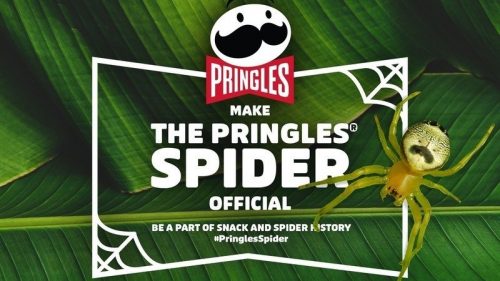 There’s a petition and a website. If the name change is approved, which they think they can do by persuading “the decision maker” with enough signatures, the first 1500 signatories get one free can of potato chips. Who is the “decision maker”? They don’t know.

Pringles has added a petition to Change.org with the hopes that the International Society of Arachnology, the American Arachnological Society, and other organizations will “do what’s right and recognize this very real spider as the Pringles Spider.”

How awkward. The American Arachnological Society does not determine nomenclature, neither does International Society of Arachnology. You can send all the requests you want to them, and they’re just going to give you the side-eye and block you as spam. There is an International Commission on Zoological Nomenclature, but they have very strict rules about the assignment of binomial nomenclature, you aren’t going to change that. Common names are vague and often lazily defined by usage; you can call it the “Pringles spider” if you want, but it has no official weight.

There is absolutely nothing preventing Pringles from putting a photo of Araneus mitificus on all of their packaging and happily calling it the Pringles Spider. They could also make commercials with a smiling anthropomorphized spider touting their product, and get rid of the mustachioed cartoon man altogether. They don’t need a petition for any of that!

Go ahead, Pringles. I dare you. I double-dog dare you.