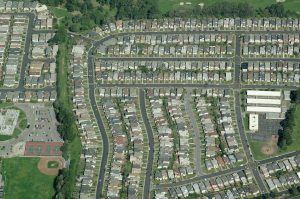 Why do we do this to ourselves?

It’s good to have an outsider take a look at us and give some insight. Here’s an excellent example: a Slovakian wondering what’s up with American suburbs.

Slovakian sees a video about American suburbs and posts questions to Reddit. The level of bafflement is hilarious and appropriate. pic.twitter.com/f6X5CzeYuE

I’ve asked those same questions myself. When I lived in Pennsylvania, we first got an apartment in a shiny glossy hellhole, in a town called King of Prussia. It was the most dead, soulless place I’ve ever been to. The apartments were clean and good, but imbedded in loops of freeways, and the sole attraction was a mega-mall. We got out of there as soon as we could.

The next stop was a house in a suburban development near Jenkintown. It met one of the criteria mentioned by the Slovakian: there was bus service. I made that a requirement by taking mass transit to get to any place we were seriously considering. But the rest of that list fit it perfectly. The only things in that development were residential housing. If you wanted to go anywhere, you had to have a car. On weekends, there were no coffeeshops to walk to, no movie theaters, nothing. You stayed home and mowed your lawn. I kind of hated it.

We had moved to Pennsylvania from Salt Lake City, and that was an unpleasant change. Salt Lake City is a weird place, but I’ll give it this: there were lots of parks in walking distance from anywhere you might live. There was a bagel place a block away from my apartment, and three movie theaters within a few blocks, one of them a funky art house kind of place. We were surrounded by restaurants, too, although with three little kids we didn’t get to partake very often.

There are enriching places for humans to live, and then there are festering, ingrown suburbs that were built by short-sighted developers and that are entirely dependent on cars for survival. For some reason, probably capitalist greed, many Americans are compelled to live in the latter, for lack of alternatives.

A few years ago, the city of Minneapolis took a bold step and changed zoning laws. Such a simple thing, with deep consequences!

Minneapolis will become the first major U.S. city to end single-family home zoning, a policy that has done as much as any to entrench segregation, high housing costs, and sprawl as the American urban paradigm over the past century.

On Friday, the City Council passed Minneapolis 2040, a comprehensive plan to permit three-family homes in the city’s residential neighborhoods, abolish parking minimums for all new construction, and allow high-density buildings along transit corridors.

“Large swaths of our city are exclusively zoned for single-family homes, so unless you have the ability to build a very large home on a very large lot, you can’t live in the neighborhood,” Minneapolis Mayor Jacob Frey told me this week. Single-family home zoning was devised as a legal way to keep black Americans and other minorities from moving into certain neighborhoods, and it still functions as an effective barrier today. Abolishing restrictive zoning, the mayor said, was part of a general consensus that the city ought to begin to mend the damage wrought in pursuit of segregation. Human diversity—which nearly everyone in this staunchly liberal city would say is a good thing—only goes as far as the housing stock.

It’s probably too soon to tell for sure, and there’s more to this problem than just zoning, but there are hints that we might be getting some incremental, evolutionary change. Here’s an article by a landlord <makes the sign of the cross, mutters a prayer of protection> that suggests there has been a subtle shift. First, she points out the racial disparities — maybe that ought to be one of the first answers to give that Slovakian. Race hatred poisons everything in this country.

I’ve worked on housing affordability since 1997. That whole time, the Twin Cities has been losing ground, with homes becoming steadily less affordable. Rents have been rising — sometimes very rapidly. The portion of people paying more than 30 percent or even 50 percent of their income in rent (the definition of “housing cost burden”) is stubbornly high, especially for Black households. While we increase public funding for Affordable Housing — the subsidized kind — the number of unsheltered people grows. 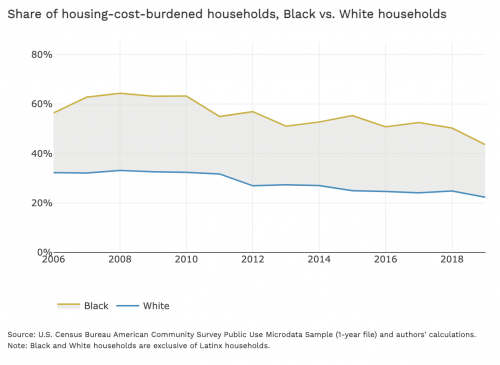 But then she looks at rents. It’s messy, and complicated by the fact that we’re in a pandemic, but things are looking slightly better.

This spring, I pulled all the median advertised rent information from the Minneapolis Rental Housing Brief into a spreadsheet. I didn’t adjust it for inflation. I used three-month rolling averages to smooth out the monthly noise. Check out these results. 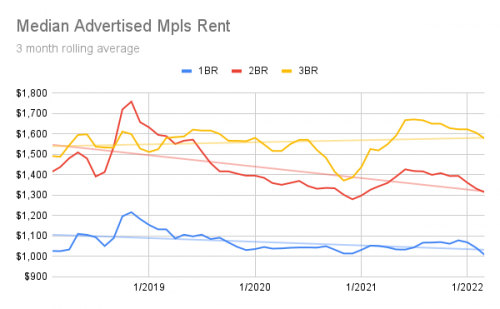 Data: HousingLink Minneapolis Rental Housing Brief, chart by author
The actual advertised median rents for one- and two-bedroom apartments are lower — in actual dollars — in 2022 than they were in late 2018. Three-bedroom rents went up 2 percent over the four years, while inflation went up 11 percent over the same time. These shifts started more than a year before the pandemic. “Post” pandemic increases look big due to the atypical and extremely low rents during summer 2020. But trends show that Minneapolis rents have simply returned to pre-pandemic levels.

Rents are a rather narrow parameter to scrutinize livability in a city, but it’s something, at least.

As for my situation now: I’m in a small town that would find it difficult to lock down a large chunk of land and reserve it for single family housing, although they’d like to try, I’m sure. There are some nascent suburb-like areas near town where the local construction company has put up rows and rows of houses. We looked at those when we were on the market, and crossed them all off our list when we noticed their common feature: they all had gigantic garages, another affliction of American housing. We don’t own three gargantuan trucks, which would have easily fit into those garages, so we didn’t see the point. Now we live in a quirky older home with all the commercial amenities within a half-mile walk, and a university next door, which is a much nicer way to live. We’ve gone for weeks without driving a car!

I guess the bottom line explanation I’d give the Slovakian would be two words: cars and racism.

Oooh, it glows so prettily! » « Classic example of the logic of cults