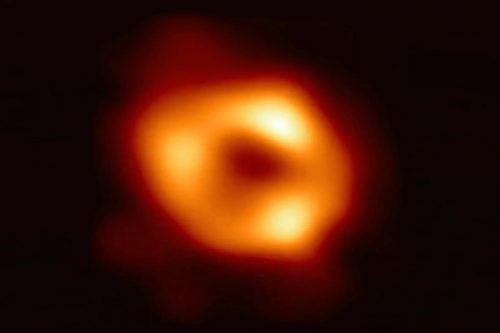 There it is: the black hole at the center of our galaxy, named Sagittarius A*. Hi there, big fella! You’re very pretty, please don’t swallow us up!

It was quite an achievement, but weirdly, so many of the articles about it try to downplay it. OK, there are bigger black holes out there.

The M87 black hole is far more distant and massive than Sagittarius A*, situated about 54 million light-years from Earth with a mass 6.5 billion times that of our sun. In disclosing the photo of that black hole, the researchers said that their work showed that Albert Einstein, the famed theoretical physicist, had correctly predicted that the shape of the shadow would be almost a perfect circle.

Yeah, yeah, we know. M87 is impressive, but the mass of four million suns, like Sagittarius A* possesses, is nothing to sneeze at. Also extraordinary and impressive.

The worst comes from an astronomer talking to the Washington Post.

Feryal Ozel, a University of Arizona astronomer, described the achievement as “the first direct image of the gentle giant in the center of our galaxy.”

WTF? Our black hole is not gentle at all — it’s a snarling, spitting, shrieking maelstrom of lethal radiation and deadly cosmic forces. I will not tolerate this diminution of our all-engulfing pit of chaotic darkness.

Signing out for a while » « The American Way of Life