At least not if they’re Russian. All those photos from Ukraine of tanks with their turrets blown off? There’s an explanation. See if you can recognize the design flaw. 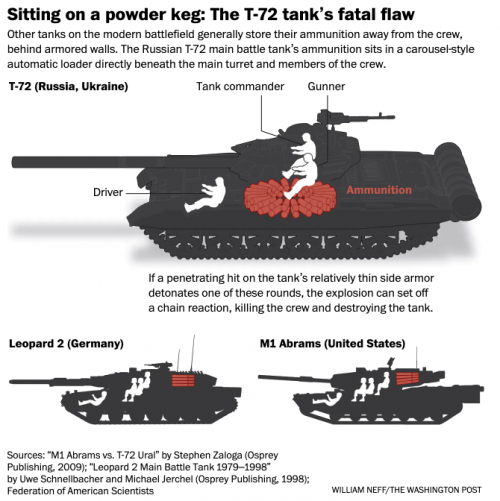 “For a Russian crew, if the ammo storage compartment is hit, everyone is dead,” said Robert E. Hamilton, a professor at the U.S. Army War College, adding that the force of the explosion can “instantaneously vaporize” the crew. “All those rounds — around 40 depending on if they’re carrying a full load or not — are all going to cook off, and everyone is going to be dead.”

Yikes. My son briefly drove tanks — American ones — before joining the signal corps, and it’s a good thing his mother didn’t know that job involved driving a large steel-encased bomb. I feel a lot of pity right now for Russian mothers.

If we really cared about the future, we’d jail all the long-termists » « It’s the lab coat that sells it