And they fluoresce, too! 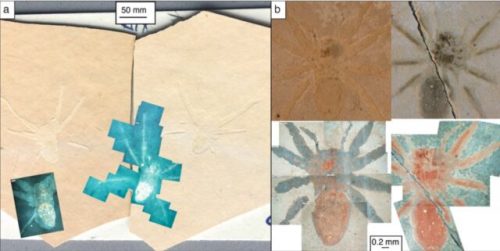 Part and counterpart of two fossil spiders shown in plain light and under UV illumination.

These are part of a well-known invertebrate fossil bed, 22.5 million years old, in France. It contains lots of well preserved insects and spiders, and one question is…why? What makes this particular place so good at preserving these delicate specimens?

The fluorescence was a clue. They dug into the chemistry of the fossils, and figured out that the glow was produced by the sulfurization of chitin, that as the dead spiders sank in the diatom-rich waters of an ancient pond, the sulfur in the diatoms reacted with the chitin carbohydrate to produce a tough carbon polymer, inedible to the microbes, that could last for millions of years. 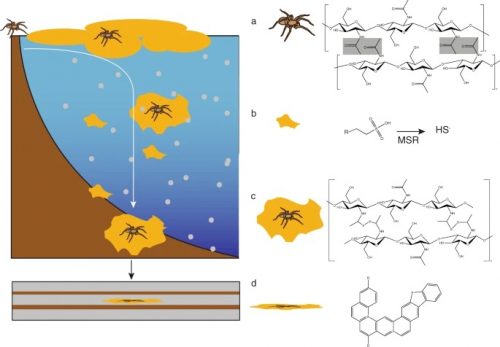 Cartoon shows the entire proposed pathway: spider becomes entrained in planktonic diatom mat. Pieces of the diatom mat, both with and without spiders entrained within fall to the sediment floor against a background sedimentation of other diatoms and algae (gray dots). With time, these sediments become compressed and preserved into the rock record. a Chemical composition of chitin. Two chains of chitin are illustrated, organized in anti-parallel. Gray boxes indicate the carbonyl functionalities on the chitin. b Sulfonate-containing molecule, which are common in diatom EPS, can undergo microbial sulfate reduction (MSR), leading to the production of sulfide. c Chitin molecule after sulfurization. C–S bonds could potentially replace the carbonyl functionalities, and S–S bridges could form across the chitin chains. d Idealized molecule representing a chitin polymer after further diagenetic alteration, which could result in the formation of aromatized carbon.

I thought that was kind of neat. It’s also a reminder to biology students that you never know where that organic chemistry we make you take might be useful.

Numbers go up, numbers go down, what does it all mean? » « If you’re sane, you should be afraid