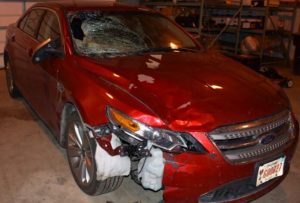 South Dakota highways have an unsavory reputation: long empty stretches of nothin’ lined with occasional farms or a small town, with Republican politicians disregarding the speed limits to race hither and yon, collecting speeding tickets because they’d rather be anywhere but there. It’s a mostly featureless death maze with emptiness between the Corn Palace and Wall Drug. Every once in a while one of the conservative road warriors gets caught, but they happily flaunt the law and get back to buzzing about with impunity. Except maybe this time.

South Dakota Attorney General Jason Ravnsborg (R) might face a little justice, because what he did ought to be in a horror novel, or maybe a Coen brothers movie. I’m going to put it below the fold because it is particularly grisly.

As the Beast reports, “After the crash, Ravnsborg dialed 911, saying he struck something ‘in the middle of the road,’ but did not know what he hit. It was only later revealed that Boever’s face came through Ravnsborg’s windshield, and his shattered eyeglasses were found inside the vehicle,” adding, “The troopers said Boever was on the vehicle for at least 100 feet before he was deposited at the side of the road, a leg severed. He died on impact. Ravnsborg has insisted he had no idea who or what he struck, at least at first, but law enforcement officials who investigated the crash have cast doubt on that.”

Oh. A pedestrian’s bloody face punched through his windshield, propelling his glasses onto the car seat, and he hit him with so much force that he severed his leg…and he didn’t notice. Just a bump in the road, you know.

Meanwhile, his fellow Republicans aren’t sure whether he ought to be impeached or not. Unbelievable.

Lawrence wrote, “a growing swath of his own GOP, who dominate the state legislature a… face a key step next week in deciding whether to impeach him,” with State Rep. Charlie Hoffman (R) admitting he had been on the fence until seeing evidence handed over by law enforcemnet officials last Wednesday.

“After seeing the length of time Mr. Boever’s body was on the AG’s car with his head inside of the AG’s car’s window, and then flying off hitting the middle of the lane behind the AG’s car, leaving bone fragments on the road and skidding into the ditch at 65 mph, my mind has changed,” Hoffman explained. “I now have irrefutable evidence the AG knew exactly what he hit and lied to investigators and the Hyde County sheriff.”

They have to decide whether to impeach him? They haven’t already decided on the obvious? Jesus fuck, Republicans are thick, and South Dakota Republicans are among the worst of the breed. Ravnsborg only got a slap on the wrist!

Lawrence wrote, “After a months-long criminal investigation, Ravnsborg—who never even appeared in court—was only charged with three misdemeanors. As part of a plea deal, he pleaded no contest to two minor charges, was fined $1,000, paid $3,000 in court costs. and was ordered to promote safe driving. He reached an undisclosed settlement with Boever’s widow.,” adding, “Initial impeachment hearings were launched in February 2021, only to be halted after Noem released two videos of Ravnsborg giving lengthy interviews with North Dakota Bureau of Criminal Investigation agents.”

There is one law for you and me, and a different law for those in power. A person’s life is only worth $4000 in South Dakota. It probably cost more to repair the damage to Ravnsborg’s car than that.

They’re voting today at 11am on whether to impeach him. Yesterday, Ravnsborg sent out a letter begging not to be impeached, because it would set a bad precedent to fire a politician because of a traffic accident. He feels no remorse at all. It wouldn’t set a bad precedent to give Republicans immunity to commit acts of vehicular homicide?

I am a man, and a teacher » « First thing in the morning, a knife to the heart