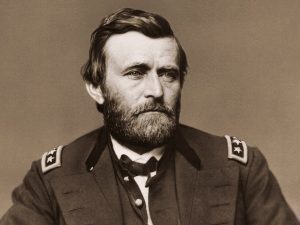 Besides out-generaling the treacherous Confederates and putting down one rebellion that split the country, Grant also was an advocate for an important law after the war: the Ku Klux Klan Act of 1871.

President Ulysses S. Grant asked for the law after the rise of the KKK following the Civil War, and it was passed within a month with broad support. The law targeted Klan activity, making it illegal to use force, intimidation and threats to prevent people from voting, serving on a jury or testifying in court. The law specifically makes it illegal to “go in disguise upon the public highway or upon the premises of another” and allows victims to sue perpetrators in civil court.

Grant’s administration then used it to almost completely dismantle the KKK in America for years, bleeding them dry with civil suits.

That sounds like a good law. Maybe we should go after the Republican party with it. But for now, I’ll settle for the fact that it’s being used to dismantle openly Nazi-affiliated groups, like those that rioted in Charlottesville.

More than a dozen of the nation’s most prominent white supremacists and hate groups conspired to intimidate, harass or commit acts of violence during 2017′s deadly Unite the Right rally, according to a jury that also decided the men and their racist organizations should pay $26 million in damages.

The 11 jurors couldn’t come to an agreement on two federal conspiracy claims, but they found that every defendant — including former alt-right leader Richard Spencer, rally organizer Jason Kessler and Christopher Cantwell, dubbed the “crying Nazi” after sharing a video of himself weeping — was liable under Virginia law.

“We think that is a resounding verdict today and frankly a good sign for the future on the remaining counts,” plaintiffs attorney Karen Dunn said, referring to the allegations that the men conspired to commit racially motivated violence and failed to stop it — accusations her clients might pursue again in a future lawsuit.

The lawyers who accomplished this worked hard and made personal sacrifices to corner these rats and bring them to justice, so good for them, too. When lawyers and judges fail, we get results like we’ve seen recently, with murderers walking free. This group did not slack in their duties.

They can’t think about what will happen if they aren’t successful. They see this case as not about one incident, but about all right-wing violence in America. Unchecked, we end up with more events like Charlottesville, and like the Jan. 6 attack on the Capitol.

So, it’s all on the line: democracy, the ability of people to live without fear.

Plus, Spitalnick pointed out that they’ve already made it harder to be a Nazi in America ― or, at least, more expensive. Spencer has no attorney because he’s out of money. Defendants can’t raise money because they’ve been deplatformed from fundraising sites. White supremacist group Vanguard America has been ordered to pay $16,000 for disobeying court orders in the case.

It’s a slow bleed of access and money until what was once the dapper face of terror, illuminated in fire, is revealed for what it always has been: nothing more than hatred.

So raise a glass to President Grant on Thanksgiving Day. His legacy lives on.

What your turkey looks like to a vegetarian » « Abolish marriage, or abolish Christianity. It’s that simple.