Before my email went down, I was engaged in an exchange with an Indonesian student.

He wrote to me asking if he could ask me a few questions about evolution. All right, it’s an excess of manners to ask if you can ask, but OK, I told him to go ahead. For future reference, anyone, I’m not into formalities or deference — just put your questions up front, boldly. I’ll either answer or not. When someone is that cautious, though, it makes me suspicious.

His next email informs me that he is writing a book to correct misconceptions about evolution in the Indonesian community, and that he is an undergraduate. A bit presumptuous, don’t you think? Most undergraduates are just learning about evolution and lack the knowledge to write a book, but maybe he’s precocious, and maybe he’s exceptionally well educated, and maybe he’s going to narrow the focus of his book to something appropriate. There are undergraduates who are mature enough to do a good job presenting the scientific perspective, but you’re going to have to show me that you’ve got the chops.

His question, though, floored me. He tells me he’s been reading Harun Yahya’s “beautifully illustrated” Atlas of Creation, and that he wants to know if ‘living fossils’ that have been totally unchanged for hundreds of millions of years exist, and gosh, isn’t that a problem for evolution? And then, I knew he’s playing a disingenuous game and trying to trap me.

Yahya’s book is a transparent fraud full of stolen images that strikes one note over and over again: here’s a stolen photo of a fossil. Here’s another photo of a modern animal. See? They’re identical! Therefore evolution is false. Nobody with even a glimmering of an education in biology would fall for it. Stasis is part of evolutionary theory, and besides, a superficial photo of a fossil or animal with murky provenance, selected specifically for their similarity, is not evidence of much of anything. Creationists have no respect for the evidence, though, so anything that reinforces their faulty assumptions is acceptable, and it doesn’t matter whether they’re Islamic or Christian creationists. 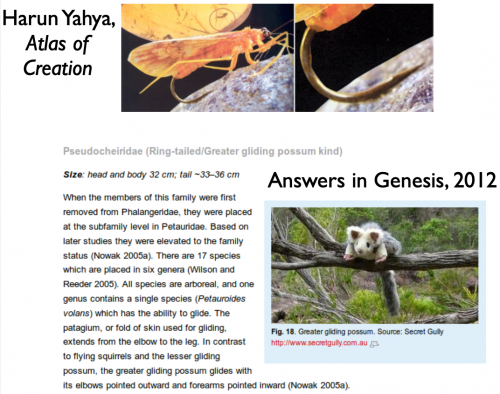 So here’s a guy whose source of information about evolution is a creationist propaganda book, who claims that he has sufficient authority to write his own book about evolution, and he’s asking this fucking stupid question. It wouldn’t be stupid from a layman, but he’s making this obnoxious pretense of authority, and most offensive of all, he thinks I’m stupid enough to fall for it.

I see this over and over again. Creationists have this absurd confidence that they have discovered the great flaw in evolution that thousands of scientists who studied it for years have missed, and they love to spring ‘zingers’ on us that they’re sure will stagger us and send us reeling backwards, to quit in defeat like the professor in Big Daddy. 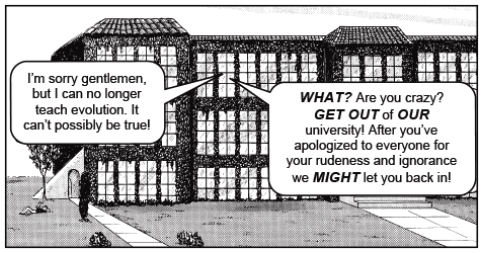 It’s not going to happen. Trotting out some poorly referenced factlet and your profound misconceptions about evolution aren’t going to shock me. I’m also not at all impressed when you’re the kind of weasely coward who can’t even be honest about your intentions.