Rob Skiba was a right-wing evangelical preacher who told people that the COVID-19 vaccine was the “mark of the beast”. He bet that he would be proven right, and that his critics would be proven wrong by ending up dead. 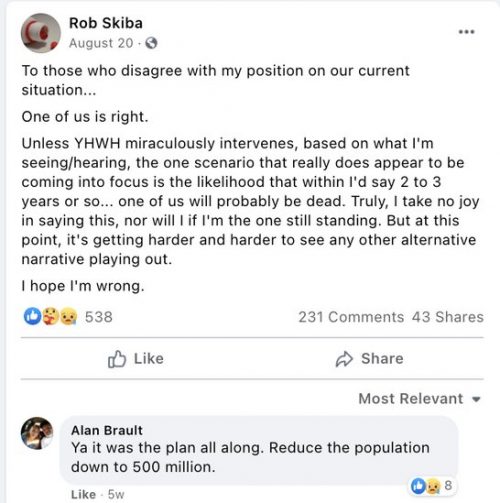 You know exactly what happened, right? Is this a little too predictable?

Rob Skiba, an influential figure in flat earth and Christian circles, has died of COVID-19, colleagues announced on Thursday. He had been fighting the virus since at least late August, when he began exhibiting symptoms after “Take On The World,” a biblical flat earth conference. “He has been sick since coming back from TOTW,” a Facebook friend posted in early September, adding that Skiba had been hospitalized for low oxygen levels. One of the country’s most prominent advocates of Flat Earth Theory, Skiba was also skeptical of COVID-19 vaccines and some of the illness’ treatments. On the first day of the Take On The World conference, Skiba authored a Facebook post suggesting that the COVID-19 vaccines were dangerous.

It’s just extra ironic that he caught it at a flat earth conference.

Another person who died recently is the atheist, Tom Flynn.

“He saved the legacy of the Great Agnostic, Robert Green Ingersoll, from obscurity. He carried the torch for atheism, secular humanism, and clear-eyed rationality for decades with his powerful and copious writings and speeches—undoubtedly helping to cause the Rise of the Nones. All while cracking jokes and delighting everyone in his orbit,” said Blumner. “And how lucky we were to be part of it.”

“The death of Tom Flynn is a tragedy of epic proportions for everyone who cares about the equality of atheists anywhere in the world.”

Tom left a rather mixed legacy. Sure, he promoted atheism, but one of the reasons he contributed to the “Rise of the Nones” is that he also drove people away from atheism with his bizarre obsessions with, for instance, hating Christmas (ignore the War on Christmas goof, it’s a secular holiday and that’s how we celebrate it). There was nothing ironic about his death, we all get old and die, and Tom didn’t brag about his invulnerability and the uselessness of modern medicine before succumbing. He also didn’t subscribe to any flat earth theories.

Ken Ham is also sad about the death of Tom Flynn, because now he won’t be able to convert him. Ham got a note from an 11 year old girl and contemplates how Flynn ought to have been as gullible and uneducated as a child.

When I read the news about Tom Flynn, I thought of this young girl and her love for God’s Word and the messages I gave. I thought, “If only Tom Flynn would have had the faith of this child.” As we read in Scripture, “Truly, I say to you, unless you turn and become like children, you will never enter the kingdom of heaven” (Matthew 18:3).

Then I pondered how important it is to do all we can to help undo the work of Tom Flynn. Yes, we are not going to give up, we are going to be more enthusiastic (another word Ellie used) than ever to reach these Nones, and anyone else we can, with the truth of the saving gospel.

A truth that has not been demonstrated, and Ken Ham’s biblical literalist cult is fucking weird. But yeah, Ken, keep on flailing about, you might manage to convert children with your childish stories. With Tom Flynn dead, though, he’s going to have to change his personal project to get a different person before they’re dead.

I often think about the times I had with another famous person in secular circles, Bill Nye, and how I prayed for him while he stood in front of me, and how I pleaded with him to receive the free gift of salvation. But sadly, he rejected this, and as far as I know continues to do so. So we need to be reminded to pray for Bill Nye and do what we can to undo all the damage he has done in spreading his anti-God worldview.

You know, Bill Nye does not promote atheism. He’s an agnostic. What he does is try to teach science, which, in an interesting but unsurprising revelation, Ken Ham considers “anti-God”.

Now I’m curious about an ongoing race, though. Ken Ham is 69, and rich; Bill Nye is 65, and well-off; which one will die first? If it’s Ham, Nye isn’t going to say a word, probably, unless he’s poked at by the media. If it’s Nye, you just know Ham is going to be playing up how “well, he’s discovered the truth now!” and whining about how the poor man failed to find Jesus.

We’re all going to end up dead someday, so what matters is what you do when you’re alive. I think I’d rather be a Flynn or a Nye than a Skiba or a Ham, and that’s something I have the freedom to choose, unlike this fantasy about an afterlife.