Gab, the social networking site, is having some troubles, again. They’re being attacked! By bad actors! Oh no! 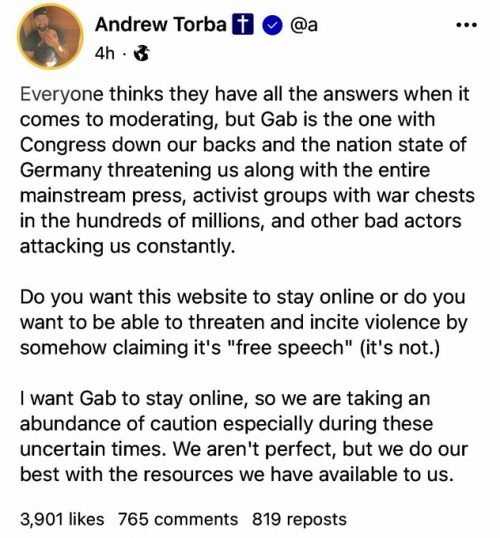 This is my favorite ironic line from the complaint.

Do you want this website to stay online or do you want to be able to threaten and incite violence by somehow claiming it’s “free speech” (it’s not.)

Since its inception, Gab has welcomed deplatformed social media users, generally attracting those on the far right. When Twitter suspended a number of alt-right accounts just after the 2016 election — including white nationalist Richard Spencer’s — Gab welcomed them with open arms.

In early October, when Facebook purged a number of accounts connected to QAnon, Torba published a blog post welcoming them to the site. “Gab is happy to announce that we will be welcoming all QAnon accounts across our social network, news, and encrypted chat platforms,” Torba wrote. He added, “Members of the QAnon community have been active on Gab for several years. We have never seen any calls for violence, threats, or any other illegal activity from this group of people.”

Except for fomenting the Jan. 6 insurrection, of course.

The Capitol mob began organizing weeks ago for the violence that occurred on January 6, planning inside conspiracy theory and far-right online communities on platforms like Parler and Gab. Groups that typically live in the darker corners of the internet stepped into the spotlight when they took the Capitol and broadcast the breach around the web.

The groups that stormed Capitol Hill this week have long been active on platforms like Gab and 4chan, and more recently, they’ve adopted newer tools like the lightly moderated social media site Parler and the anonymous messaging service Telegram to organize.

And who could forget?

The platform made headlines in October 2018 after a gunman opened fire in Pittsburgh’s Tree of Life synagogue and killed 11 worshipers. Robert Bowers, who is accused of the crime, spent years posting anti-Semitic rhetoric on Gab. His final post before the shooting read, “I can’t sit by and watch my people get slaughtered. Screw your optics, I’m going in.”

No sir, no violence here. It’s all those people trying to shut down a hate and conspiracy theory site who are being violent. 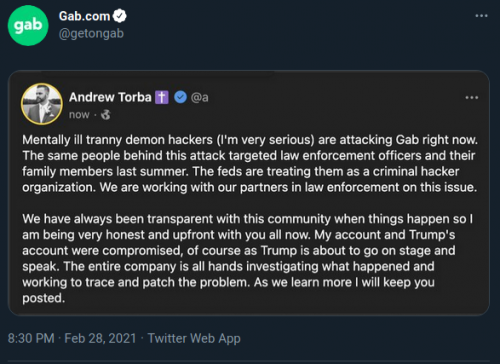 They used those teeth to crack coconuts, don’t you know » « Heather Heying & Bret Weinstein have no credibility left