Wow. It’s been years since I heard a creationist bring up this argument. I thought it was as dead as the dinosaurs! But the crack team of Christian apologists actually said this (around the 11 or 12 minute mark):

Let’s do this thought experiment. You need to cut up a big head of lettuce. What do you reach for? Probably a sharp serrated knife.

If I were to show you the skull of a fruit bat, you’d probably think it was a meat-eater. But it uses those teeth to rip and shred the fruit of a mango.

What were they talking about? This. 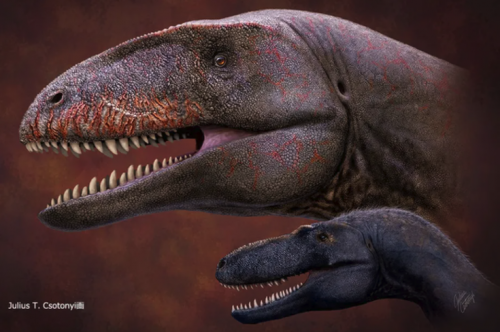 A new study of the creature’s jawbone — published in Royal Society Open — found that the dinosaur often measured 26 feet long and weighed close to 2,200 pounds.

That means it was longer than an African elephant and heavier than a bison, according to Science Alert. So that’s pretty big.

No word on whether the scientists have discovered giant Mesozoic lettuces or mangoes. Yet.

Really, world, I can’t afford much of a drop in life expectancy » « Come see the violence inherent in the system!