I’m so sorry. I stumbled into a den of rabid naturopaths who were just oozing this malarkey to justify their beliefs, and now I’m exposing you to it. It’s just a quick exposure, you’ll develop resistance quickly enough.

First I have to point out that calling something a theory doesn’t make it true. A valid theory has to be supported by a wide base of observation and experimental evidence — you don’t get to label something as a theory because you think it would dignify your brain fart. I will point out that Haeckel’s recapitulation theory was a theory, too, which was built on nothing but speculation and misinterpretation, and it collapsed thoroughly.

Secondly, theories are not sanctified by attaching a 19th century scientist’s name to it, allowing you to ignore all work ever since. Haeckel was, I think, a pretty good guy, but that doesn’t make his ideas valid. Likewise (and this is a common creationist mistake), Darwin wasn’t the be-all and end-all of evolutionary thinking, and glorifying or trashing Charles Darwin has no effect on whether evolution is true or not.

I mention these two things because they are the totality of the evidence for Terrain Theory: it is called a theory, therefore it is a theory, and it was formulated by a 19th century scientist named Antoine Béchamp, a rival of Louis Pasteur, and Pasteur was a fraud who recanted Germ Theory on his deathbed, therefore Béchamp wins. That’s kind of it. It’s an archaic hypothesis that did not survive the testing grounds of science a hundred years ago, but now it’s been resurrected by anti-vax loons who are waving the banner of Béchamp and Terrain Theory, never mind the evidence.

So what is it? Here’s one definition from a Dr Karen (note: linking to her site is not an endorsement. She’s a kook who sells nutritional supplements and cleanses and superfoods, all the latest grifter buzzwords).

Terrain theory states that diseases are results of our internal environment and its ability to maintain homeostasis against outside threats. Terrain theory believes if an individual maintains a healthy terrain, it can handle outside invaders or threats which cause diseases. When terrain is weak, it favors the microorganisms. Hence, the health depends on the quality of an individuals’ terrain.

She’s understating it. Most scientists and doctors wouldn’t find the overall idea objectionable: your ability to resist disease is going to be affected by your general health, that poor nutrition will impair your ability to fight off bacteria and viruses, and hey you, get out and exercise more and eat a healthy diet. That aspect is fine. Where Terrain Theory goes off the rails is when it becomes a complete denial of the role of microorganisms in disease. Polio, for instance, isn’t caused by a virus, the virus is just a symptom of the lousy condition your body is in. Cancer isn’t caused by mutations in cells that lead to overproliferation, it’s a product of your pH. You’ve probably seen garbage like this — cancer cures that are all about eating the right foods to adjust your body chemistry, or purging yourself of toxins with magical cleanses.

Here’s another quack, “Dr” Young (again, linking is not an endorsement, Young is an evil creep. See Gorski’s take-down as a “cleanse”).

Béchamp was able to see bacteria, and other nano materials emerge from the cell, as opposed to coming
from outside the cell, like most people have been taught.

Dr. Young doesn’t believe that corona, ebola, or zika can infect a human being, let alone exist at all.
“For you are dust, and to dust you shall return” Genesis 3:19

Béchamp proposed that the environment of the body, determines what can live and not live. Young says that the source of common disease, is chemical poisoning, which can come in many forms, such as pesticides, herbicides, genetically modified foods, and vaccines. All of which, do not come from nature. They are produced by the military – industrial – pharmaceutical complex.

There’s a lot of familiar tropes in Young’s “work”. There’s the referring to himself in the third person, the false authority of a title (he has a doctorate from a diploma mill), the irrelevant Biblical reference, the pretense of idolizing a long-dead scientist, the denial of all contemporary evidence, and the choice of convenient scapegoats, the military–industrial–pharmaceutical complex and Louis Pasteur. He also cites this weird claim that Pasteur recanted germ theory on his deathbed. What is it with these people? They also claim Darwin recanted evolution on his deathbed (he didn’t), as if any of that would matter. Both Pasteur and Darwin died quietly in their old age after long illnesses; they had more important things on their mind, and weren’t busily marshaling arguments for an academic debate. They were busy dying. The people who cite Béchamp are quacks.

I expect we’ll hear more about Terrain Theory now and in the future. The anti-vax brigade will rush to endorse anything that sounds sciencey, while doing their damnedest to ignore 150 years of good, solid, evidence-based science that shows that germ theory is still valid.

Sheesh. If you’d told me 40 years ago that in the far future, in the 2020s, I’d have to defend the germ theory of disease, of all things, I’d have to ask what cataclysmic disaster had destroyed civilization and reduced us to a post-apocalyptic wilderness. But no! All it took was Fox News and the Republican party to shatter the public understanding of science.

By the way, at least Robert Young was convicted of multiple counts of grand theft and conspiring to practice medicine without a license a few years ago. So I guess some vestiges of justice still linger in our desolation.

Also, not this Robert Young. 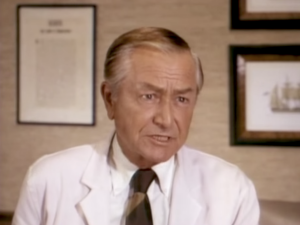