While all the headlines have been about the ego-trips of a trio of billionaires, it seems I failed to notice the substantive plans of an international coalition of space agencies. They have some ambitious goals for the coming decade.

Among the different initiatives:

Some observers have spoken of a “second space race” pitting the United States against China and Russia.

“I think that’s alarmist rhetoric; it has a lot of baggage,” says Todd Harrison, director of the aerospace security project at the Center for Strategic and International Studies, a Washington-based think tank. “The previous space race between the U.S. and the Soviet Union was an outright competition about being first. Now, it’s … about who’s going to have the best coalition of countries.”

The Artemis program seeks to lay down guiding principles for the civil exploration and use of space, starting with the moon but extending to Mars, asteroids, and comets. To date, 12 countries have embraced the Artemis Accords.

Russia and China, meanwhile, are inviting international partners to join them in their moon-base project.

Let the rich boys play with their toys — or rather, don’t, tax the space dilettantes and make them stop their stupid efforts at putting their stupid dicks into brief spurts of parabolic flight. This is the real deal: taking the effort to build scientific infrastructure in space, which could be a useful foundation for more science. Cooperative efforts by multiple nations to do science? Yes, please. I could support that. I think in the long run Space Socialism will be better and more productive than the current Space Capitalism. I will also be impressed if humans return to the Moon in — checks calendar — just two years? For real? Make it so.

Unfortunately, I do have some reservations, ala Gil Scott-Heron. 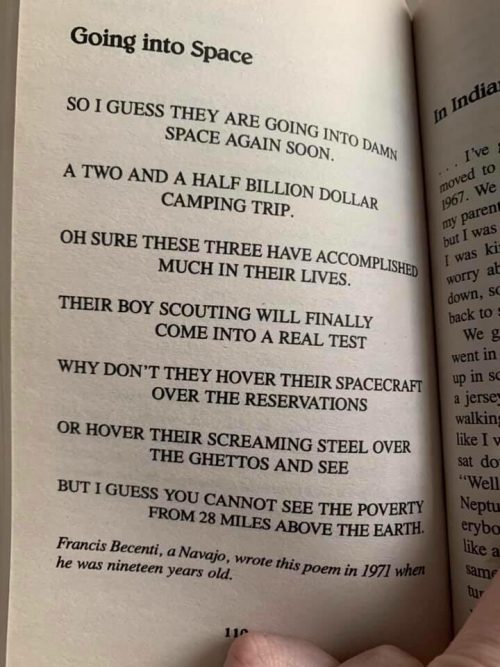 I have to temper that concern with the statement that all of science is a kind of luxury, an investment in long-term thinking, and you can always make a legitimate argument that we have more pressing problems to spend our money on. However, I also believe that it’s a worthy goal if it is done equitably, if all people have the opportunity to participate, and if the benefits are spread far and wide, rather than being a big funnel to drain more money into the pockets of the already wealthy, or an excuse for billionaires to mug for the camera.

Insurrectionist cosplay » « Dang, it can be annoying when medicine works too well