There are a thousand stories in that mob of insufferable insurrectionists who stormed the capitol on 6 January. This is one of them. 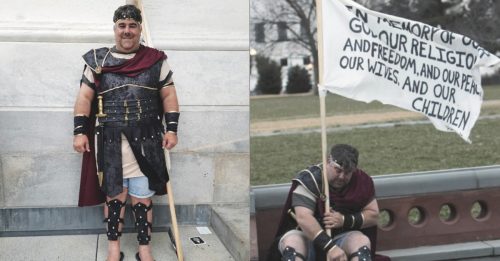 The picture ought to be enough, but I’ll fill in a few details. That’s a guy dressed up as Captain Moroni, a figure from the Book of Mormon. His flag reads, IN MEMORY OF OUR GOD, OUR RELIGION, AND FREEDOM, AND OUR PEACE, OUR WIVES, AND OUR CHILDREN. ALMA 46:12. The FBI had absolutely no problem tracking this absurd wanker down, and he has been arrested. His real name is Nathan Wayne Entrekin. He bragged about showing up in costume, and despite the flag blustering about his wives, he also recorded video on his phone addressing his mother.

I’m here for Trump. Four more years, Donald Trump! Our rightful president! I made it to the relative top, anyway. Oh my gosh, how many of us are here? Must be like, millions. Couple million, maybe. I keep running into trees, though. I gotta get this first, though, before my costume falls off me. Check this out, Mom. All those people.

Being raised in religion doesn’t help one distinguish fact from fiction, does it? The Book of Mormon was a fantasy story scribbled up by a 19th century con artist, and Captain Moroni has about as much basis in reality as Captain America or Captain Marvel or Captain Planet or Captain Caveman or Captain Underpants.

Of course, he also parrots the racist bullshit the Mormons have always believed.

The rioters weren’t sending their best. But then, we knew that all along.

Respect the Appalachians » « We’re going to the Moon again?