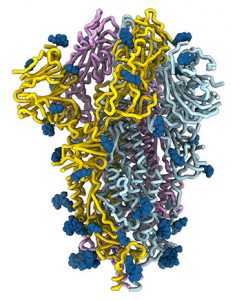 For the past month or so, my inbox has been inundated with letters insisting that they have proof of the lab leak hypothesis for the origin of SARS-CoV-2. Their insistent missives are full of jargon, like arginine codons and furin cleavage sites, and insistence that the particular sequence found in the virus could not possibly have arisen naturally. I am not an expert in viral genomics by any means, so my usually reply is a shrug that I don’t know the details, but I find their claim that the viral sequence could not have appeared by natural causes to be naive and unlikely, and that their probability argument is not a clincher. I’ve usually refrained from pointing out that they sound exactly like a few generations of creationists I’ve had to put up with.

A lot of that jargon and argument can be traced back to an article by Nicholas Wade in which he made those very same claims. I tend to veer away from anything by Wade — his embarrassingly bad book that advocated for “race realism” convinced me he’s not a trustworthy source — so I didn’t dig deeply into it. He seems to have persuaded some people, including David Baltimore(!), who has since retracted his endorsement of Wade’s “smoking gun”.

Wade asserted that a particular arrangement of a specific sequence in the viral genome, called a codon, was unlikely to have gotten there naturally. There are actually six different codons for arginine, and the one found in a particular region of the SARS-CoV-2 genome called the furin cleavage site does occur less frequently in viruses than it does in the human genome. An even more telling detail to Wade is that this uncommon arginine codon shows up twice in that small segment of the virus’s genome. For that to occur naturally, Wade wrote, “a chain of events has to happen, each of which is quite unlikely.”

That’s what Baltimore assented to. But scientists say Wade misdescribed critical links in his chain. Scripps Research virologist Kristian Andersen led an early inquiry into the possible role of a lab escape in the origin of the virus, which concluded that it “is not a laboratory construct,” a finding that Wade termed “poor science” in his article. After Baltimore’s quote became public, Andersen re-entered the argument, and became one of a number of researchers to challenge many of the details Wade relied on. Andersen told Nature that Wade’s claim that steps in the emergence of the virus were too improbable to have occurred is not true. Rather, the pandemic virus uses that codon about 3 percent of the time that its genome calls for arginine—not common, but not impossibly scarce either—and, importantly, that other coronaviruses make use of it too, at similar or greater frequency.

Columbia University virologist Vincent Racaniello says the unusual pairing of a particular codon that Wade saw as decisive actually points away from laboratory manipulation. “We have some idea why this codon is rare in RNA viruses,” Racaniello says. Selection pressures have been identified that would discourage its use in viral genomes. But, he says, “We don’t know why it’s not zero. The fact that it is conserved in many viruses means that it’s beneficial in some way we don’t understand.” This is the kind of mystery that evolution throws at researchers all the time. Racaniello adds that if a lab researcher was trying to modify a virus to measure its effect, the researcher wouldn’t use the codon pairing identified by Wade because its effect would be too unpredictable.

I’d had an uncomfortable feeling with any argument that claims a low probability makes something impossible, because improbable things happen all the time. But 3%! That’s not low, especially not when you’ve got a virus with a population of trillions.