The Serpent Mound in Ohio is an amazing artifact of a past culture — earthworks over 400m long in the shape of a snake. 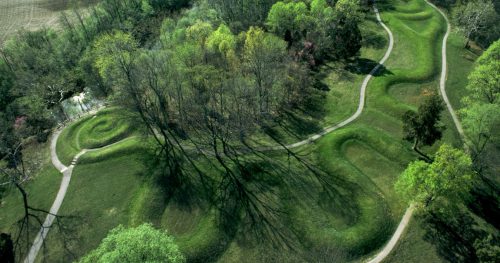 You can imagine how the European colonizers of the area regarded this immense communal work of architecture…or don’t imagine, just see what a mess they made of the story.

“Unfortunately the Serpent Mound has become the epicenter of efforts to appropriate sacred American Indian sites and replace the Indigenous story with all sorts of fantastic, absurd stories,” said during his solstice presentation.

“Let’s be absolutely clear. At the heart of these myths and fantastic stories is the racist notion that American Indians were too stupid to have built something so wonderful,” he added.

Right. There’s Graham Hancock, of course, babbling about “The Ancients” and a world-spanning civilization of New Age stargazers, or various people on the History Channel claiming that it’s evidence of a race of giants, because, after all, American Indians were too short to build large structures, so there had to be a population of 9 or 10 foot tall giants to build these mounds. It’s disrespectful and nonsensical.

In recent years, activities at the mound have taken on the quality of what Barnes describes as a minstrel show disrespecting and appropriating Native cultures.

Since the 1987 Harmonic Convergence, the mound has become a mecca for followers of New Age spirituality. The idea of the Convergence was created by author and art historian Jose Arguelles who claimed August 16-17, 1987, were significant dates in the Maya calendar and represented an especially auspicious time to meditate for global peace.

Some New Age activities such as digging and burying items in the mound, forwarding information purporting that the effigy was built by aliens from space or prehistoric giants and misrepresenting Native connections to the site has been of growing concern to tribal leaders like Wallace and Barnes. Of even greater concern was the way that past managers of the Serpent Mound site often turned a blind eye to these activities, sometimes allowing such practitioners to manage and stage events at the mound. This sent a message to the public that these wild theories were part of the official history of the site according to Wallace and Barnes.

It was supposed to be a kind of cosmic bomb shelter for people at the end of the world predicted by the Mayan calendar to occur in 2012, for instance. You may have noticed we didn’t achieve world peace in 1987, and the world is still here in 2021, and that whole Mayan calendar thing was nothing more than the end of a calendar cycle. That reminds me — I’ll have to get a new calendar in January. Either that, or the world is ending at midnight on 31 December. Hey, what do the Maya have to do with the native people of Ohio, anyway?

Jason Colavito has a thorough dissection of the absurdist pseudo-history of Serpent Mound. Would you believe that some claim it is a cathedral for a global penis-worshipping cult? Of course you would. There are loonies everywhere, and they tend to get rewarded with a “documentary” series on the History Channel.

The summer solstice was just this past weekend, so I took a look at the calendar of events for Serpent Mound. There was some good stuff about the history of the area and the archaeology of the mound, but also…Bigfoot? Nephilim? New Age quacks peddling crystals and herbs? Whoever runs this event has no integrity at all and willfully misrepresents the truth to make a buck.

The good news though, is that at least this time the organizers invited some of the descendants of the people who actually built the mound to come speak. That’s a little progress.

The Shawnee tribe returned home to the Serpent Mound on the longest day of the year.

The Summer Solstice, June 20, the longest day of the year, marks the first time that the Shawnee tribe has officially returned to the Serpent Mound located in Ohio to present their history and connection to this place that they called home so many years ago.

Although it was certainly ancestors of the Shawnee people who built the magnificent serpent shaped mound, the largest earthwork effigy in the world, Ohio failed to involve the tribe in conveying its meaning to the public until now.

Glenna Wallace, chief of the Eastern Shawnee Tribe of Oklahoma and Ben Barnes, chief of the Shawnee Tribe, also located in Oklahoma, spent the weekend telling visitors to the Serpent Mound historical site about their peoples’ and ancestors’ connection to Ohio and the mound.

I also like the title of the article: “Shawnee reclaim the great Serpent Mound: Ancestors of Native Americans, not prehistoric giants or space aliens, built the mound in Ohio”. The white people who run the solstice event ought to be embarrassed that they had to invite Indians, who had been dispossessed from the land and treated as primitives who couldn’t have built the structure, to come back and tell them the simple truth.