Once again, Israel’s boot is stomping down hard on the Palestinians, and the Israelis are positively giddy about it.

The song is not only genocidal, it's also suicidal — from the story of Samson, who kills himself while getting revenge on the Philistines.

It would be too easy to say this is fringe. These violent sentiments pervade Zionist discourse about Palestinians.
https://t.co/SLeqr0d46B

I’m trying hard to see both sides in this conflict, and this article, for instance, is doing it’s best to present a balanced story. All I see, though, is a chronicle of a grossly asymmetric battle.

A day of upheaval at the holy sites of this contested city quickly widened into a night of warlike violence in communities across the country early Tuesday, with hundreds of rockets from the Gaza Strip causing injuries in Israeli neighborhoods and retaliatory airstrikes killing at least 22 Gazans, according to officials there.

Something is not adding up. Hundreds of rockets are launched, but the end result is only a few injured civilians?

Air-raid sirens sounded every few minutes in towns where many Israelis had already passed the night in bomb shelters. On Tuesday afternoon, more than 200 rockets struck southern Israel within the span of an hour, including in the Israeli coastal city of Ashkelon just north of Gaza, according to media reports. At least four members of a family were reported injured when one rocket hit an eight-story apartment building.

These things seem to be remarkably ineffective. Are they little more than glorified fireworks? I had to look them up on Wikipedia to get the basics, and yes, they are nasty little things I wouldn’t want fired in my general direction, but they aren’t useful weapons of war.

The Qassam rocket is the best-known type of rocket deployed by Palestinian militants, mainly against Israeli civilians, but also some military targets during the Second Intifada of the Israeli–Palestinian conflict. According to Human Rights Watch, Qassam rockets are too inaccurate and prone to malfunction to be used against specific military targets in or near civilian areas, and are mainly launched for the purpose of “harming civilians.”

They have a range of 3 or 4 kilometers, are grossly inaccurate, and most of them seem to fail, one way or another. In the recent escalation,

Military officials said more than 500 rockets had been launched from Gaza since the start of the flare-up, although a large percentage of them failed to cross into Israel and exploded, landing inside the enclave itself. The army’s expansive antimissile defense network, known as Iron Dome, destroyed more than 90 percent of the rockets that reached Israeli airspace, the army said.

These are tools of impotent rage that mainly seem intended to harass civilians. Israel knows this, too.

In 2006, the Israeli Ministry of Defense viewed the Qassams as “more a psychological than physical threat.”

Meanwhile, the Israeli response is somewhat more deadly and distructive. 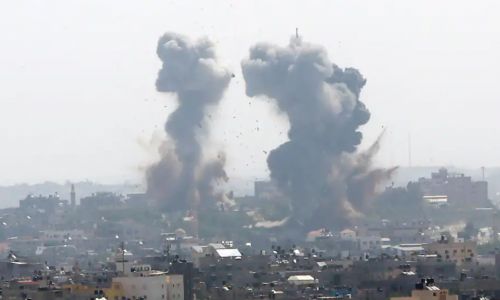 In response to the launches, the Israel Defense Forces carried out sustained retaliatory strikes inside the Gaza Strip overnight and into the morning, with warplanes conducting more than 140 attacks. The IDF said it killed 15 Hamas and Palestinian Islamic Jihad fighters in strikes that targeted rocket manufacturing and storage sites, training and military complexes, two underground tunnels and the home of a battalion commander.

Images from the Shati refugee camp near Gaza City on Tuesday morning showed scenes of destruction following at least one Israeli airstrike that appeared to target the top floor of a nearby residential building. The building’s concrete rooftop collapsed onto the apartment below, where residents were shown picking through the rubble. 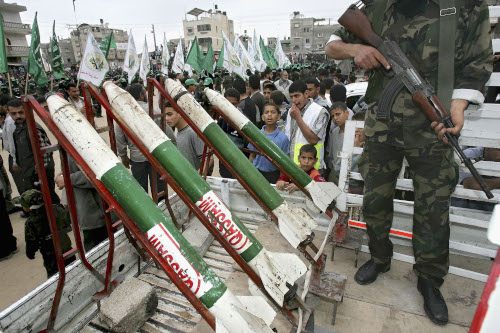 …and Israel retaliates with this. 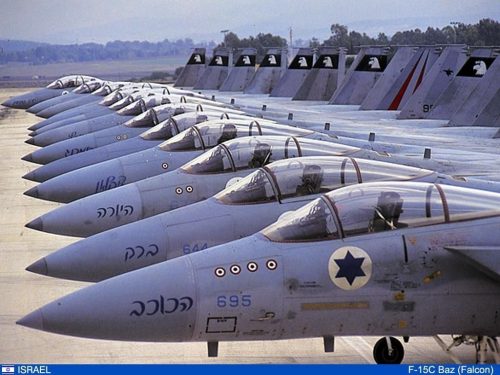 That’s stupid. If that’s how the war is being fought, F-15s vs homemade rockets, Palestinians are doomed and flailing futilely. But Palestinians aren’t stupid, so maybe we shouldn’t assume that’s how the war is fought, and just maybe the stupid ones are the Israelis. This is a political campaign fought on a global stage, and all I see is a heavily armed bully murdering people armed with popguns, and then the bully dances in the street while innocents burn.

Who is going to win that war? I know for sure that the loser is any high-minded principles or history of courage by the people of Israel.