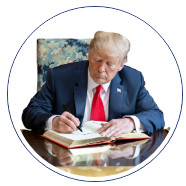 The poor man. He was banned from Twitter and Facebook (he tried to appeal to Facebook, but they’ve recently denied him). Then he announced that he was going to create his very own social media platform, to make an end run around Big Tech. Now he claims to have done it. You can go to his grand social media platform right now, and I did.

I looked at it.

I puzzled over it.

It’s a web page where Donald J. Trump can type things, creating “posts”, which are displayed in chronological order, and you can go to his site and read them.

Trump has created a blog, and is a blogger. That’s all it is! It’s not a very good blog, and it’s missing some important things, like allowing people to comment, or like having titles (every post is titled “Donald J. Trump”), or being able to link to individual posts, but by golly, it’s a blog! A half-assed blog, but a blog nonetheless.

Embrace it. Don’t be one of those wankers who insists their blog isn’t a blog. Also don’t try to claim you’ve built a novel social media platform — it’s just an ordinary ol’ blog, just like mine!

Would you get into a van with this man? » « A bit young to be a Ph.D. candidate, don’t you think?