OK, I can do that. Today is the day the final nail gets pounded into Trump’s coffin. 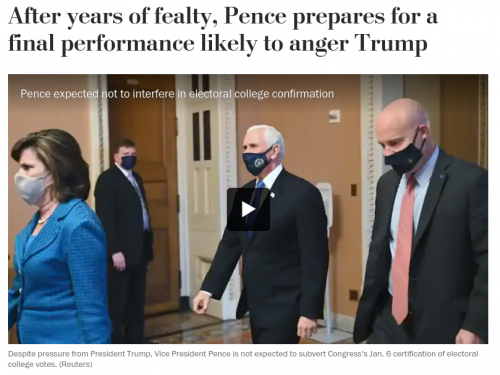 Vice President Pence and his team have huddled for hours with the Senate parliamentarian. They have studied historical examples of other vice presidents who have presided over election results.

And they have begun anticipating the ire of President Trump — likely to come in the form of angry tweets — in the aftermath of Wednesday’s certification of the electoral college vote count before a joint session of Congress.

The role of Pence, who will preside over the certification, is largely ceremonial, one of the few official duties of the vice president in his capacity as president of the Senate. But Trump’s continued and baseless insistence that he won the 2020 presidential election has thrust Pence into a vise between the Constitution he swore to uphold and the president he has promised his fealty.

Oooh, “angry tweets”. That’s what the wrath of Trump has been reduced to. This act by Pence is also his final doom — he sold his soul to Trump, and now this is what he looks like to the rest of the world.

Pence’s performance Wednesday in the Senate chamber will serve as a fitting coda for a vice president who — through a combination of deference, obsequiousness and studied self-effacement — has made navigating the whims and loyalty requirements of his mercurial boss a full-time pursuit.

Go find a nice hammock in rural Indiana, go to church a couple of times a week, and relax for the rest of your life. Your political influence has been snuffed out, Mike. Mr Obsequious. Mr Deference. Mr Spineless.

You might want a good solid fence and a couple of bodyguards, Mr Chickenshit, because the former president is going to sic the right-wing goons you spent the last four years enabling after you.

What is this mania about “cancel culture”? » « Good news/bad news