Netflix has this new series, Alien Worlds, that I sort of half-watched yesterday. It was nice brain candy to munch on while I was more focused on grading, but nah, sorry, not a lot of substance to it.

It’s only 5 episodes long, and each one is built around a different imaginary planet with somewhat different parameters, with different challenges for the life that evolved there. Within each episode, there’s a fraction that uses CGI to model the imaginary creatures of the imaginary world — and the CGI isn’t bad, we’ve come a long way from the clumsy models of old Discovery Channel “Walking with…” shows — and there’s a larger fraction dedicated to describing the earthly research that inspired it. 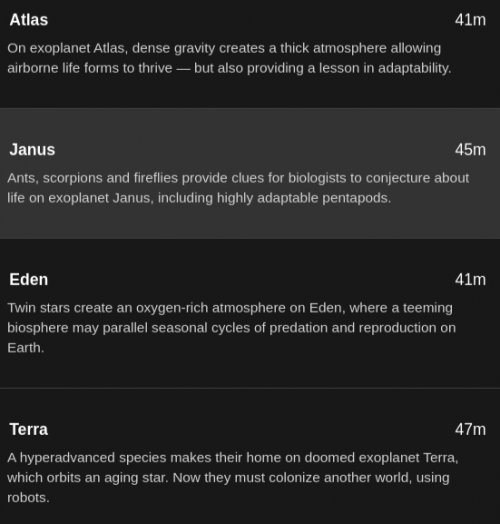 The problem is that the real world stuff, with interviews with real scientists, was far more compelling than the CGI gimmicks. The “Janus” episode, for instance, is supposed to be about a tidally-locked planet with huge extremes in the environment, but it’s really much more about terrestrial arthropods, with researchers explaining their work in interesting environments with complex organisms. Their imaginary pentapods were sterile and cartoonish — it was a world with a nearly negligible amount of species diversity, just their one cartoon alien scampering about, plucking out 1-dimensional prey creatures on rather barren landscapes. Every time they were on screen, I was grumbling “Get back to the leaf-cutter ants”.

That’s how I felt about every episode. The central gimmick of imaginative CGI aliens was less impressive than the real biology being done on Planet Earth, and was just a distraction. Human imagination is just not as good as evolutionary reality.

One big plus about the show: they were working with actual researchers in various places around the world, and that meant they escaped from the usual trap of one narrator (usually a white person who isn’t involved in the science) providing third person descriptions of what’s happening. Instead, we get lots of diverse people, women and brown people with accents, describing in first person what they find exciting about their work. The researchers have a lot of enthusiasm and joy about the biology.

One big negative: skip the last episode, it’s terrible. I knew it was going to suck when they opened with the “alien autopsy” footage. They then move on to an imaginary planet populated with brains in vats faced with the death of their star…and they lack any earthly analog, so instead of cutting back and forth between CGI and enthusiastic scientists doing real research, it’s switching between animated robots tending blobs floating in tanks (boring!) to human SETI researchers (even more boring!).

I’m not looking forward to a continuation of the series. It’s nice background noise, but if I were to make any recommendations to the producers, it would be to ditch the whole CGI/aliens nonsense, but that’s probably the premise that got them a Netflix deal.

The atavism theory of cancer is bunk, again » « Our victory celebration will be starting soon