It’s always sad to see someone bring disgrace to my profession. There’s a physical science professor, Thomas Brennan at Ferris State University in Michigan, who went on a surprising rant. He raged about an elite Jewish conspiracy, that the coronavirus is caused by nanotechnology in cell phones, Covid19 is another jewish revolution, that the moon landings were fake, that atom bombs are fake, that the pandemic lockdown is a conspiracy by the Leftist new world over to take over, etc., etc., etc. He has since been placed on leave, although one has to wonder how long this guy was in place on campus, with the other faculty in his discipline looking on. They had to have known!

He was a full-on racist, anti-Semitic, far-right kook with an account on gab and ludicrously awful views about science. 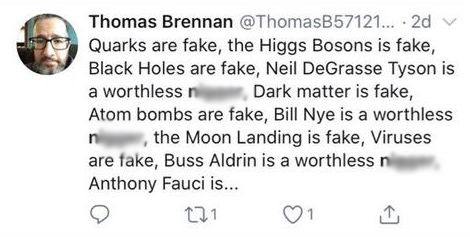 But, you say, what about his side of the story? Maybe he’s got really good, rational arguments to support his views, and would be able to martial an excellent defense in a debate. I got news for you: Brennan wrote a formal letter explaining his position. It really doesn’t help him at all.

This controversy started after I made a few statements in a College of Arts and Sciences
meeting of faculty and staff about the Covid-19 pandemic. My statements were to the
effect that I believe the Covid-19 pandemic is a stunt designed to enslave
humanity and strip us of all of our rights and freedoms.
I don’t believe that the pandemic is a hoax, people have died. But its severity is being
exaggerated by revolutionary leftists in the media and government who ‘never let a good
crisis go to waste.’ The end result of this hysteria, if unchecked, will be a mandatory
vaccine. No one will be allowed into public places or permitted to buy food in a
supermarket unless they present proof-of-vaccination. Initially, this electronic vaccination
certificate will be tied to a person’s smartphone, but will soon after be in the form of
injectable micro or nanotechnology in the vaccine itself. If this comes about it will truly
be a fulfillment of the prophecy of the mark of the beast, as described by St. John the
Apostle in the Book of Revelation, Chapter 13:16-17.

Let me address a few of these tweets, starting with the one where I used the ’n-word.’ I
believe the ’n-word’ is a mind-control spell designed to make us hate each
other. I am not racist against black people, I love and respect them. But I
reject the premise that there are certain magic words that should never be used in any
context or by certain people. I uttered the word to try to neutralize its power, and
its implied meaning in the context of the tweet was as a synonym for ‘human being,’ or
‘person,’ since I used it to describe people of different races. I deleted this tweet within a
few hours of typing it back in June 2019, way before I made the Covid-19 comment, so
someone must have screen-shotted it and been building a portfolio to use against me for
when the time came.

It’s all a conspiracy! They’re out to get me!

Ironically, my casual use of the ’n-word’ in that tweet isn’t the most controversial thing
about it. It’s that I’m calling out the huge scientific and historical frauds that I believe
have been perpetrated since the mid-twentieth century. There is real science, but there is
also fake science. Fake science is an instrument of oppression. I believe that Bill Nye,
Buzz Aldrin, Neil deGrasse Tyson and Anthony Fauci are human beings of worth, as we
all are, but I believe they are telling some lies and are a part of a system of lies.

Besides using the ’n-word,’ a linguistic atom-bomb that I only used to get people’s
attention, I also said ‘Atom Bombs are Fake.’ The atom bomb has got to be one of
the most fear-inducing, oppressive ideas of all time, and ‘fear is the mind-killer.’ After rewatching the footage of atomic bomb tests from the 1940s, 50s, and 60s, it appears to me
they are just films of explosions of large piles of TNT, made to look much bigger through
special effects. By filming an explosion at a high frame-rate and playing it back in slow motion, an impression of immensity can be achieved. Other special-effects techniques
such as ‘front projection,’ ‘forced perspective,’ and superimposed images also seem to
have been used in some of the footage. A combination of these techniques was used to
produce the surprisingly real-looking tornado scene in the 1939 film, the Wizard of Oz.
The best special effects were then, and are still, a military secret, and were only used
sparingly in fictional films of the time to define a false frame of what was real on film.
Hiroshima and Nagasaki were fire-bombed and flattened overnight with conventional
bombs.
There is much more to the atom bomb deception, but let me move on. I also said: “the
Moon landings are fake.” The films of the Apollo moon landings were faked using
the same special effects bag of tricks that was used to fake the bomb. But the most
powerful argument for why I believe we did not land on the Moon is that the inner solar
system is a blast furnace, and the sun-lit surface of the Moon is over 700 F, not 250 F, as
NASA claims. That is why the Moon glows red during a lunar eclipse—not because of
refracted red light from the Earth’s atmosphere, as Bill Nye and Neil Tyson would have
you believe. The shadow of the Earth’s atmosphere is blue, not red.

He taught physics, let me remind you.

The entire world has fallen under the spell of a satanic, globalist elite. Their end-goal is a
technocratic, one-world government, where everyone, Jew and Gentile, will be
microchipped and tracked 24/7. They use the rhetoric of social-justice and cancel culture, not to bring about equality, but to smear and silence anyone who opposes them.
We will all be equally enslaved if they have their way. They use science, both fake and
real, as a weapon to control us and keep us in a constant state of fear. The fear-spell of
the atom bomb has worn off after all of these years, so they had to unleash a new one,
Covid-19. Lord have mercy on me and on us all.

His intentions are noble and pure, you see.

Don’t you worry about Professor Brennan. He may be about to be fired so hard he’s going to fly out of his socks, but he has a lucrative future ahead of him as a speaker at QAnon rallies and anti-vaxxer conferences, and he’ll probably be invited onto the Joe Rogan show any moment now.

What color is your engine check light? » « We braved the wilderness to forage for food today