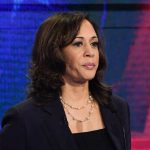 I was out spidering this afternoon when Biden announced his vice presidential candidate: Kamala Harris. Not that it matters, but here’s what I think.

I have one negative: she was a prosecutor, so she was an enabler of the carceral state. That’s the opposite of what we need, but maybe she’s learned from recent events? We can hope? Maybe someday I’ll learn that my hopes are always shattered?

I have lots of positives, though. She’s relatively young, but old enough to be experienced; she’ll represent multiple minorities, as a woman, black, and Indian; she’s smart and has teeth. I would love to watch her rend Pence into a pulp in a VP debate, although I doubt that they’ll have one.

She’s not Joe Biden. In the run-up to the primaries, I had a much more favorable impression of Harris than of Biden, so seeing her on the slate is a net gain. I’m not enthused about Biden, but he could have screwed up this choice far more catastrophically.

Not the humanists, too! » « My terrible game