Imagine you are a computer scientist and engineer, and you design a simulation that consists of a 15×15 square grid, with a ‘predator’ who follows some simple rules to seek out ‘prey’. You put most of your effort into designing the simulated ‘prey’ who uses visual detection, as well as some interesting uses of memory to simulate planning, to avoid the predator, and then you randomize the grid with various densities of black squares that block vision and white squares that allow line-of-sight to the predator. You work out some general principles for controlling the ‘prey’ simulation, for instance that less cluttered grids select for ‘prey’ that do more careful planning and have more complex rules for behavior.

I think that’s an interesting result, especially since they quantify everything. But is it enough to get a big splashy publication in Nature? To get noticed in the popular news media? Nah, probably not. It’s narrow niche research, but no one outside computer science is going to be impressed. So, how to spice it up?

I know! Claim that your simulation is significant evidence that explains the Cambrian explosion, the diversification of terrestrial vertebrates, and the evolution of human intelligence! That’s the ticket!

After explaining how their simulation works, the authors get down to explaining why their result is important. Apparently, it’s not because they’ve done anything interesting in computer science, so they need to borrow from biology to find a justification.

Parker has suggested that the origin of the Cambrian explosion lies in the atmosphere or oceans of the period gaining higher transparency to sunlight, triggering the evolution of the first image-forming eye and sparking a predator–prey evolutionary arms race that gave rise to the Cambrian’s profusion of animal forms. A second great change in transparency occurred with the emergence of fish on to land, which gave rise to a sensorium large enough to fit multiple futures. Our idealized model of spatial planning during predator–prey interactions suggests that there may be a link between the enlarged visual sensorium and habitat complexity of terrestrial animals and the evolution of neural circuits for dynamic planning.

They get even more hyperbolic when talking to reporters on CNN (see, it was a smart decision to add all that evolution stuff — it got the attention of the media).

The ways our ancestors adapted to live in patchy landscapes cluttered with obstacles “poured jet fuel” on the evolution of the brains of animals and early human ancestors, according to researchers at Northwestern University.

The combination of our enhanced eyesight and higher intelligence to survive in this complex land environment is “why we can go out for seafood, but seafood can’t go out for us,” said Malcolm MacIver, a professor of biomedical and mechanical engineering in Northwestern University’s McCormick School of Engineering.

Kind of a grand leap from a simulation on a checkerboard to an elaborate umbrella hypothesis that explains a complex and diverse evolutionary phenomenon as the the product of being able to see farther, isn’t it? I would have rejected this paper at the first sentence of the abstract, which tells me they’re not very knowledgeable about the biology they’re using as a prop.

It is uncontroversial that land animals have more elaborated cognitive abilities than their aquatic counterparts such as fish. Yet there is no apparent a-priori reason for this. A key cognitive faculty is planning. We show that in visually guided predator-prey interactions, planning provides a significant advantage, but only on land. During animal evolution, the water-to-land transition resulted in a massive increase in visual range. Simulations of behavior identify a specific type of terrestrial habitat, clustered open and closed areas (savanna-like), where the advantage of planning peaks. Our computational experiments demonstrate how this patchy terrestrial structure, in combination with enhanced visual range, can reveal and hide agents as a function of their movement and create a selective benefit for imagining, evaluating, and selecting among possible future scenarios—in short, for planning. The vertebrate invasion of land may have been an important step in their cognitive evolution.

It is “uncontroversial”? To whom? Which is “smarter”, a spider or an octopus? Why are you lumping the diversity of terrestrial animals into a neat tidy bin labeled “land animals” and making the assumption that they have more elaborate cognitive abilities than the wet creatures you’ve thrown into a bin labeled “aquatic animals”? If your hypothesis were sufficient to explain major evolutionary transitions, why is it that cetacean brains got larger as they adapted to an environment with reduced visual range? Why do you need a single a priori reason to explain the origin of complex phenomena with widely varying solutions? Why is it that the mantis shrimp, the animal with the most sophisticated visual sensorium, is neither particularly brainy nor terrestrial? 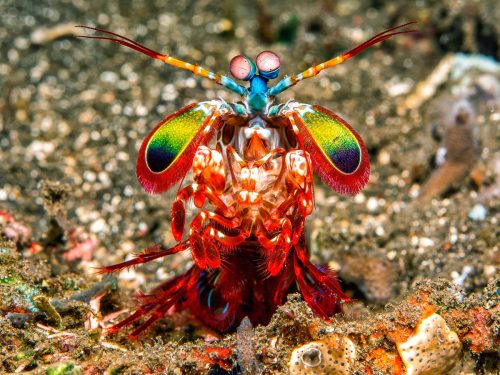 As you might guess from all of my questions, this is an immensely frustrating paper — not in its methods, or in the execution of the study, but in the overblown interpretations the authors have been made. It desperately need input from visual neuroscientists and evolutionary biologists, who might have put a damper on the nonsense they’ve shoveled into the work…but then it wouldn’t have made it to CNN, now would it? We could probably sell tickets to a battle of the umbrella hypotheses, Long Range Eyeballs vs. The Aquatic Ape. Epistemic humility just never sells.

(Oh, man, I keep coming back to exceptions they ignore. Aquatic and terrestrial environments are diverse — there are patchy aquatic environments and cluttered terrestrial ones. What about the issue of scale? The jumping spiders on my house live in a savannah-like environment, with wide open areas (the planks of my siding) of long-range visual opportunities, sprinkled with joins that are good hiding places. Why haven’t they invented calculus yet? If you tell me it’s because they’re tiny, then you’ve just admitted that the visual hypothesis is insufficient.)

The spectacle of Republican cannibalism is always entertaining » « Is there hope for November?