The Washington Post headline this morning was “Chaotic Minneapolis protests spread amid emotional calls for justice, peace”, and it’s illustrated with this photo: 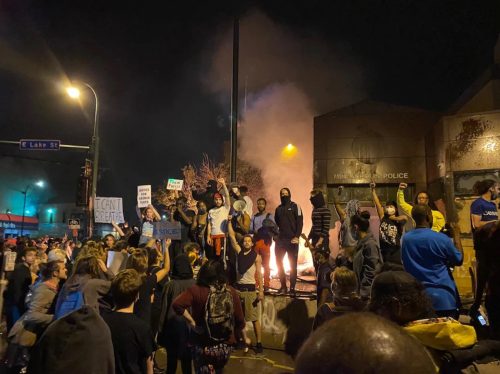 I ask, where’s the chaos? I see a small group of calm people standing victorious before the ruins of a criminal enterprise. The people speaking for the community clearly see where the chaos was coming from.

“There are folks reacting to a violent system,” McDowell said. “You can replace property, you can replace businesses, you can replace material things, but you can’t replace a life. That man is gone forever because some cop felt like he had the right to take his life. A lot of folks are tired of that. They’re not going to take it anymore.”

That’s why, he said, “Minneapolis is burning.”

Chaos is when the people delegated to preserve the peace are murdering people in the street for non-violent offenses. Chaos is heavily armed cops oppressing the communities they’re supposed to safeguard. Chaos is the district attorney waffling over whether to charge a cop for murder when they have video of the man slowly throttling another to death in public. Chaos is the absence of justice.

This is Minneapolis, a pleasant city full of good people trying to get by. It’s not Gotham City, and it never needed a crew of Batman-wannabes to keep the peace.

Why Mars? » « My name is not Ernst Haeckel