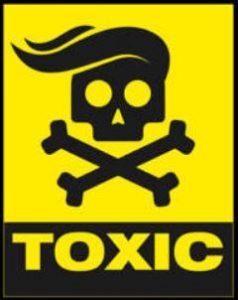 “So supposing we hit the body with a tremendous, whether it’s ultraviolet or just very powerful light and I think you said that hasn’t been checked but you’re going to test it. And then I said supposing you brought the light inside the body, which you can do either through the skin or in some other way,” Trump said, adding it “sounds interesting.”

He turned to the power of disinfectants, ad libbing about what it could do inside the human body.

“And then I see the disinfectant where it knocks it out [from a surface] in a minute, one minute, and is there a way we can do something like that [by] injection inside or almost a cleaning, because you see it gets on the lungs and it does a tremendous number,” Trump pondered.

Good god. Our best hope anymore is that Trump and his trumpkins start shooting up bleach or gargling isopropyl alcohol. Please, start a rumor that cyanide is an effective anti-viral.

I’ve seen what happens when you inject surface disinfectant into your body and the result was so bad I’d probably be put in Twitter jail if I posted a photo.

Fist-sized holes. In your person. Where the tissue died and rotted away. https://t.co/GTlWT0jbmT