Oooh, the thrill of recognition. I got a whole paragraph, too, not just a one-liner. Here’s my moment in the spotlight:

To be sure, tentacles have lots of “suckers.” The squid’s suckers are even more effective than the octopus’ in capturing prey. P.Z. Myers spells it out on ScienceBlogs.com: “They contain a piston-like structure inside an interior chamber, coupled so that when something tries to pull away from the sucker, it lifts the piston, further decreasing pressure inside and strengthening its grip—like a Chinese finger-trap, the more you struggle, the harder it is to get away.”

Except…REWIND. What’s Charisma saying to lead into that quote?

What I didn’t know was that a sneaky squid spirit would soon start stalking me.

Right about now, you might be scratching your head and asking, with all sincerity—or with all mockery—”What in the world is a squid spirit?” Essentially, it’s a spirit of mind control but its affects go way behind what you would think.

In his classic book, Demon Hit List, Eckhardt lists mind control and defines it this way: Octopus and squid spirits having tentacles; confusion, mental pressure, mental pain, migraine.” Sounds a lot like witchcraft, and I imagine that’s what it actually is. There are many expressions—and many manifestations—of witchcraft.

And what comes immediately after the quote?

Here’s a lesson: We’re not wrestling against flesh and blood. We can’t overcome a squid attack in our flesh. The more we struggle in our flesh, the greater the hold this spirit seems to get on us. The more we get in our heads trying to figure things out, the more ground the squid takes because the squid is attacking our head (our mind).

Squids also have a chameleon persona. Reference.com reveals, “Squid have the largest nervous system in the animal kingdom. They have the ability to change colors because they have translucent skin. The colors come from chromatophores, which are pigment cells that are on the outside of the skin that expand or contract to show colors.”

Spiritually speaking, this chameleon-like characteristic means it can change its behavior or appearance to stay hidden. It’s sneaky! Squids are fast swimmers and some of them can even fly. Again, that’s why you need discernment in any spiritual battle. Internet checklists and articles can be helpful if the Holy Spirit illuminates the truths within them, but we must ultimately wage prophetic warfare if we are going to win the battle.

The ignominy of it all — I am reduced to sciencey-sounding window dressing to add one little tidbit of true facts to a heaping bowl of bullshit. I shall have my revenge. When I’m dead, my incorporeal spirit will command a legion of squid demons, and they will slake their thirst for vengeance on this author’s head. 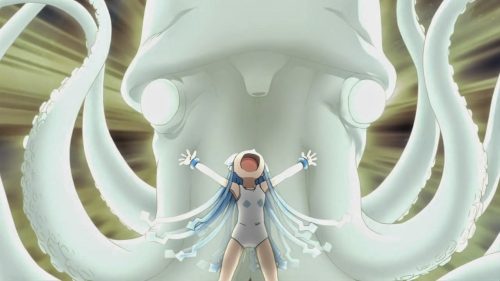 Or not. There are no floating souls or cephalopod demons, sorry.

Is this the kind of drivel that gets routinely published in Christian magazines?

Working data from a museum, all yours » « Dr Mona coming to UMM