Minnesota is not too happy about having that klutz of a state touching our southern border — we’re trying to edge our way up northwards, or lobbying for a different seat with the cool kids, rather than having to eat lunch at the table with these gomers that surround us. How about if we trade places with Nevada, or Idaho? Hanging out with Washington and Oregon would be more our style.

Yeah, Iowa FUBARed their shining moment in the sun, that day when all eyes were on the state with the the first primary election in country, and they flopped hard. We still have no election results today. The candidates have all jetted off to New Hampshire, making vague declarations of “feeling good” about their success, despite all of them having vote tallies of zero. I guess it’s sort of true that they’ve all tied for first place.

First big mistake: Iowa election officials announced that the first votes would be available around 9 or 10 pm last night. They weren’t. They set up the news networks, which had their usual babblers lined up to comment endlessly on preliminary results, and they had nothing. The Big Mouths had to sit on their thumbs all night chattering away about even less information than they usually do. Iowa made enemies.

Second, even older mistake: Caucusing. It’s a weird old-fashioned do-si-do that no one but old grey-haired party apparatchiks understand, and that discourages new people from participating. I’ve been to a couple, and was not impressed. I like that it’s an opportunity to discuss the issues, but what it really means is that you make a preliminary and public declaration of who you support, and then old grey-haired party apparatchiks come to you and try to talk you into supporting their candidate, because he (yeah, he) has the most votes. It’s not great if you support a change candidate.

Third big mistake: they relied on an app, a mysterious unnamed app of unknown origin, to report the results to party leaders. The app failed hard and spectacularly. It doesn’t seem to have worked at all. Their back-up plan was to have precinct leaders just phone in the results, but they didn’t have enough phone operators to deal with the flood of calls, so that failed big-time, too. A few industrious precinct leaders tried to drive to headquarters with their paper tallies, and were turned away. 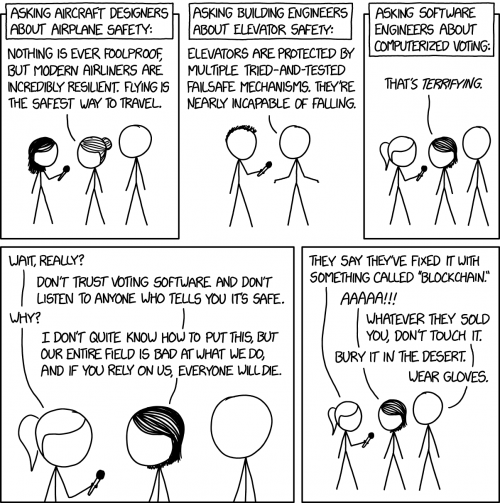 Fourth big mistake: WHY IOWA ANYWAY? They are not at all representative of the diversity of the United States, but every election cycle the goony yokel elbows its way to the front of the stage, capers for a bit, all the candidates buy a corn dog at the state fair, and they and the media treat it as prophecy. It’s annoying, primitive, and as we’ve seen yesterday, downright embarrassing. This is democracy? Jesus.

I think the truth might be that American elections have been bought and sold to Big Corn Dog.