I really detest the whole business of trying to categorize whole generations as one thing or another. Population cohorts are part of a continuum, and they’re diverse, and sticking artificial boundaries and characters on them has about as much validity as the Chinese Astrology trash you get as a placement at restaurants.

But OK, here’s one attempt to summarize the nonsense. 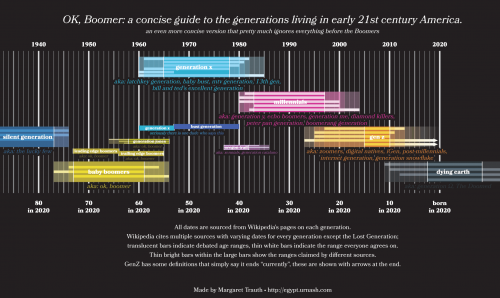 There sure are a lot of overlaps in that mess. I was born in 1957, which makes me a “baby boomer”, or specifically, a “trailing edge boomer”. I’ve got siblings who are Generation X. My kids are all Millennials, while my grandchildren are, cheerfully, members of the Dying Earth clan. Great. Glad to know who I can invite to parties. I guess I must have a lot in common with all my fellow Boomers who voted for Trump, just because we were born within 20 years of each other.

Clearly, class and race are far less significant in shaping who we are than the calendar.