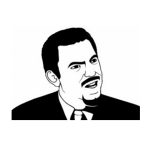 Atheist Alliance International has hired David Silverman to be their executive director.

Silverman is the controversial former head of American Atheists. He was fired after allegations of financial conflicts and sexual assault. He used his position of power to manipulate women and abuse them, and was swiftly drop-kicked out of the movement when these allegations came to light.

“He physically pressed me to the wall and began to kiss me forcefully, grabbed my breasts, and put his hand into my leggings where there was actual penetration of my vagina,” she wrote.

R. got her feet and said “no,” she wrote. Silverman then lightly slapped her face and said, “You don’t get to say no to me.”

Silverman has admitted to taking advantage of his position to indulge in infidelity and have sex with women in the movement. And this is who AAI thinks would be a great person to have on board?

Wishing David a very warm welcome, Gail Miller, AAI’s President said, “David is a well-known public atheist, a powerful leader and a compelling public speaker. He has proven management and organizational skills including leadership of national & local organizations in the U.S. He is a personality who makes things happen.

He will grow public awareness of AAI and our campaigns, he will help the board develop strategy and he will help manage campaigns to ensure they deliver for atheists everywhere.

I’m thrilled to have him on the team.”

Is she even aware that he is currently suing his former employer, and various other people, for his dismissal? This litigious person with a sordid personal history is who they’ve chosen to represent their organization? I agree with one thing, that he will grow public awareness of AAI. It just won’t grow the kind of reputation they want.

This is simply the weirdest, most controversial PR decision they could make, and I don’t understand any of the reasoning behind it. I’m going to assume that some rich, #metoo hating guy somewhere — there’s no shortage of misogynistic jerks in atheism — is applying pressure to the organization to hire the alleged sexual abuser, because that’s what they do. I’ll be curious to discover who’s making big donations to AAI, because this is not an act to make the rank and file happy, but is more likely to be catering to some privileged asshole. Or, I suppose, Gail Miller could be outrageously ignorant about what’s been going on in atheist communities.

What an interesting message this sends: if you’re caught out slapping women and trying to force them into sexual behavior, you might get fired from one atheist organization, but there’ll be another waiting to rescue you and put you in another position of power and influence. Like the Catholic Church, they’ll just shuttle you off to another parish.

Good people are jumping ship from AAI over this hiring decision.

Myself and @zara2000 will be resigning from the @atheistalliance team as of immediately. The fact that the admin team wasn't even made aware of the changes taking place until they went public is a disgrace and should be kept in mind when critiquing AAI.https://t.co/eYGpljK96V

It’s looking a bit like the Atheist Community of Austin debacle, with heavy handed regressive individuals wrecking a solid community.

The parasitic load just keeps getting bigger » « THIS. IS. MOOOORRRISSS!