I’ve been wrestlin’ spiderlings all day, although they’re getting big enough that they’re showing sexual characteristics, like enlarged palps in the males, so maybe they’re more like spider-teens. They’re about three weeks old — I showed you the newly emerged S. triangulosa a while back. I’m currently raising three species (maybe four) of Theridiidae, P. tepidariorum, S. triangulosa, and S. borealis, and I’m seeing that some of the patterns emerge fairly early and in predictable ways.

This is P. tepidariorum, the most common of these spiders, and the one I’m raising for experimental studies in the lab. Some of its obvious characteristics are the mottled abdomen — although it’s still specifically patterned, as you might see from the clear left/right symmetry — and the dark banding around the limb joints. Less obviously from the photo, one other feature is that they build 3-dimensional webs that take full advantage of the space they’re in. When I open up the container, they’re hanging suspended in the middle of the space. 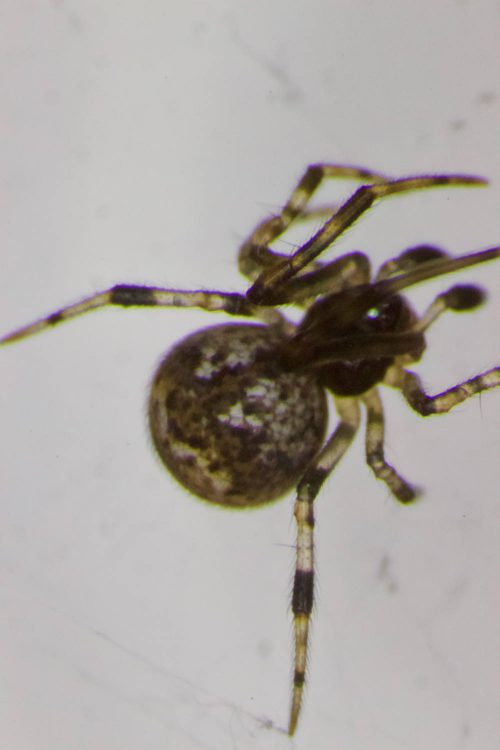 By the way, I’m pretty sure that one’s a male — the palps are enlarged, but not to the extent they will be in the full adult.

While we were out collecting, we also encountered a few S. triangulosa, and I collected a few for curiosity’s sake. They’re pretty, too! They have a nice pattern on the abdomen, with those distinctive white patches that set off the darker zig-zags along the side. They lack the strong banding around their leg joints. Their webs are subtly different, too: all of them had made a sheet of silk near the bottom of their containers, and they’d hang upside down in them, putting the web between them and the open space. 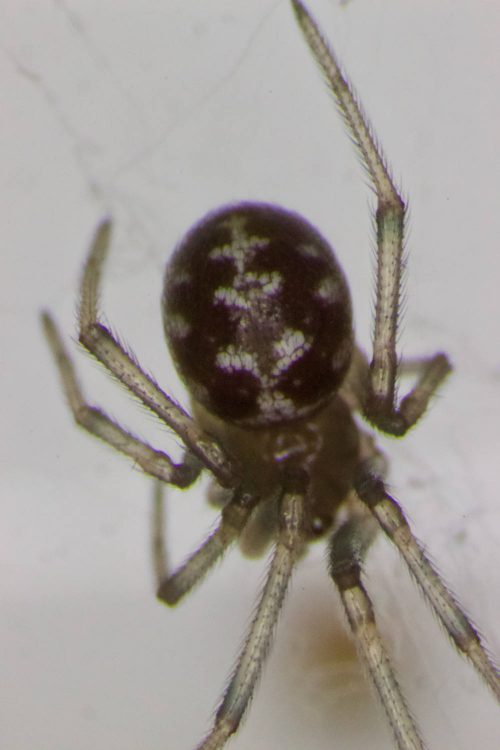 Finally, here’s S. borealis. The adults are easily distinguished from the other species, because they’re a solid purplish black with sometimes a lighter horizontal line on the front half of the abdomen, and another light line on the midline of the anterior abdomen. It’s very stylish. Here you can see that white pigmentation clearly, but they have not uniformly darkened up every where else yet. They also lack the limb banding, and they’re also going to grow up to be larger than the other species. 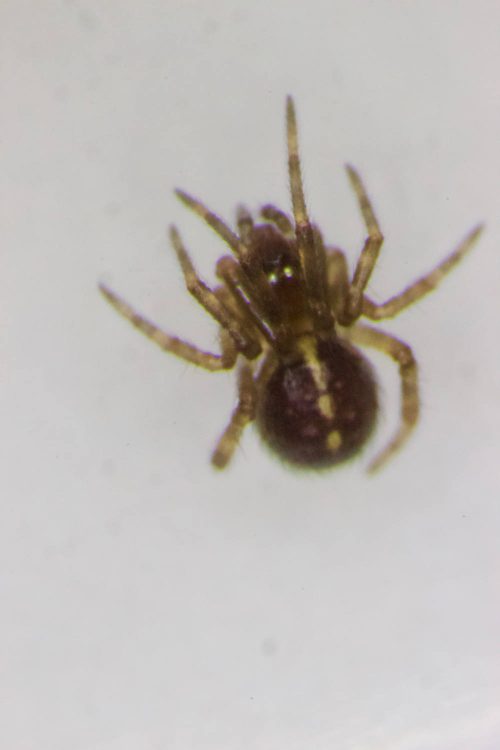 Don’t sneer at the quality of the photos, I’m still trying to figure out how to get them to hold still. I know there are ways to generally anesthetize or immobilize arthropods, like by refrigerating them, but these are young’uns and breeding stock, so I’m reluctant to do anything that might risk their viability. I had a grand time putting them under the scope and poking them with a brush to get them to change orientation — of course they prefer to hang upside down, but I want to get a look at the dorsal abdomen — and then I have to chase them on the stage and tweak the focus and snap a picture. At least this time I had a remote trigger that I could hold in my focusing hand so it was a little easier to get photos than the last time.

It’s got to get easier still, though. This winter, I want to raise spiderlings matched by day of emergence from the egg sac from all three species, and get sharp photos of dorsal abdominal pigments at regular intervals to get a time-course of their formation. Patterns are just one of those things that get developmental biologists worked up, you know. Also, P. tepidariorum shows more individual variation in those patterns, so it would be nice to get a genetic handle on their regulation. That and the other dozen projects I have in mind will keep me out of trouble when the snows come.