I said I was going to tend to my shiny newborn Steatoda triangulosa today. It didn’t take as long as I expected. Here’s the vial of my freshly emerged spiderlings; the egg sac is the foamy looking bubble at the bottom, attached to the yellow plug on the vial, and the little dots are the babies.

There were only nine spiderlings from that egg sac. It was a bit of a surprise, since when a Parasteatoda egg sac pops, I easily get over a hundred spiderlings. It makes me wonder how well S. triangulosa does in the wild — I can tell you from our summer survey that they were the rarest of the false widows we found, with even S. borealis far more numerous, and they were a distant second to Parasteatoda. Now I’m curious about what niche they fill in the local spider ecosystem.

But still, I’m particularly interested in these guys. Why? Because they have such a consistent pigment pattern!

Here’s the adult. You can see a kind of zig-zag on their abdomen, which makes me think of Charlie Brown’s shirt. From a top view you would see triangles of white against a dark background, hence the name. 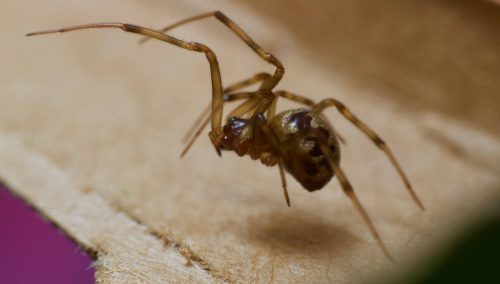 While Parasteatoda is more prolific, they also have a more complex and variable pigment pattern of dark streaks and blotches on a brown background. S. triangularis is simpler and I’d kind of like to examine the ontogeny of its ziggety-zags. Today, the feeble output of a mere 9 spiderlings can be seen here:

No abdominal pigment! You can see some of the banding appearing on the limb joints, though. Contrast that with these three juveniles, who are about a month old. 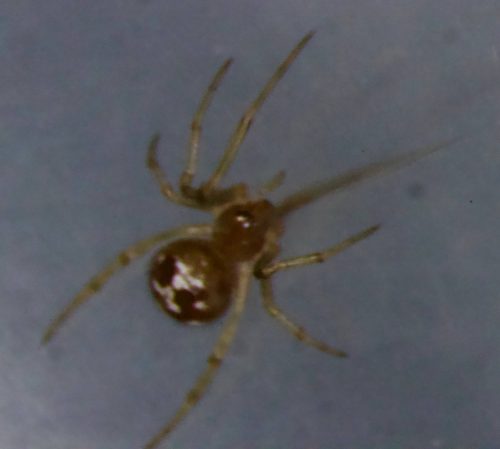 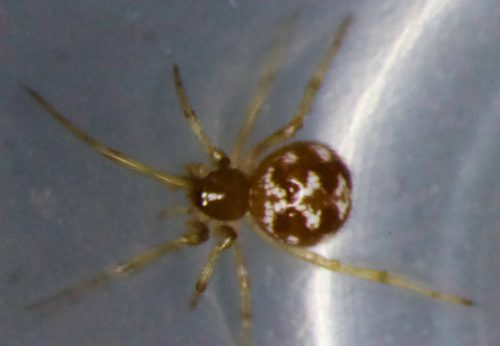 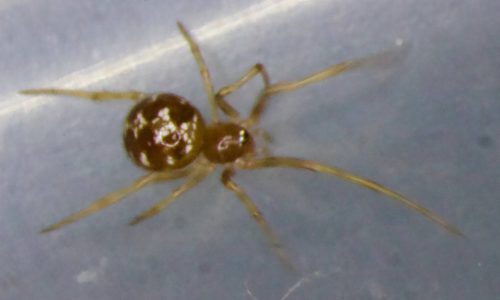 There’s some variability there, but you can see that all of them have formed a white “X” on the dorsal side of the abdomen. It’s a pattern! Developmental biologists love patterns. That’s something I could imagine being interesting to watch form, but it’s going to require daily mapping to catch the process. I don’t know now whether I should be happy or sad that they produce relatively few progeny, because the more spiders, the more work. Also, maybe you can’t tell from the stills, but in the movie it’s obvious — these are busy little beasties. They do not like to sit still for a photograph.

I may also have to eventually figure out what the pattern is in Parasteatoda, because there has to be one, it’s just fiddly as heck. It might be worthwhile to look at S. borealis, because it’s even simpler: they’re an overall dark purplish brown with a faint and variable horizontal stripe on the anterior abdomen. I’m also going to have to track down a few more wild individuals, which isn’t the easiest job — I think we saw S. triangulosa at only two houses in town. I’ll have to revisit before the frost comes!