Blake Stacey had to remind me.

Hi. I was briefly a writer for https://t.co/1MYMsjJZQt, which was run (badly) by Seed Media Group. The science-blogging community learned of Epstein's involvement when Pivar sued @pzmyers. https://t.co/DG7G8jrmXc

It’s kind of a wacky roundabout connection, but there it is. I was sued by a crackpot name Stuart Pivar for $15 million (It happens. I’m getting more than a little tired of the bullshit) because I’d pointed out that this guy’s self-published pseudoscientific book, Lifecode, was complete garbage. He didn’t like that, and he had lots of money — he was some kind of rich septic tank magnate — so he blustered and threatened and threw lawsuits at me, which he eventually dropped at the last minute when I didn’t back down. It was unfortunate, too, because I’d just done a couple of interviews with major newspapers when he withdrew, taking with him all interest by the press in the story.

Now Mother Jones interviewed Pivar about Epstein, in one very strange rambling conversation (at the end he threatens to sue over the interview if it is at all misleading, so I suspect MJ decided to go with a literal, complete transcript of everything Pivar said). And there’s my name! Yikes!

Some evidence of the tension between Pivar and Epstein is lying in public view. In August 2007, Pivar sued a science blogger named P.Z. Myers and Seed Media Group, which hosted his blog, alleging defamation. Myers had lit into Pivar’s work, calling him “a classic crackpot.” In his complaint, Pivar made a point of mentioning by name two prominent members of SMG’s board: Jeffrey Epstein and Ghislaine Maxwell. The lawsuit was later dropped.

I should have known — Seed Media Group was based in NY, was tightly focused on connecting science and media, and of course Epstein and his crony, Maxwell, would have been attracted to it, and it could well have been the recipient of Epstein money. So yeah, some of those blogging fees I was paid back then could have been stained with the Epstein taint, although I knew nothing about him at the time, never met him, and darn, never got invited to fly on the Lolita Express or visit his private island for sexy times. So while you might be able to draw a connection between us, my name would be in tiny print with only a thin red thread to tie us together. 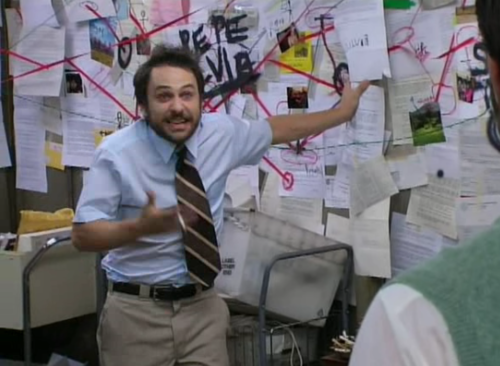 Of course, when you read the Pivar interview, you have to take into account the fact that he really is a delusional kook. He says this, for instance, which is kind of nuts.

I’m a scientist, and I saw all the incredible, wonderful things he did for science, which nobody’s managed to have the intellect to understand.

In Pivar’s case, no, we did understand his “science”, and it was trash.

By the way, one additional thing I have to bring up is that lately a number of the scientific associates linked to Epstein have been slinging a bit of mud as a distraction. In particular, they’ve tried to accuse the late Stephen Jay Gould of also being guilty of playing around with Epstein. Unfortunately for them, and the New York Times’ reputation for fact checking, Gould has a rock solid alibi.

Umm, Stephen Jay Gould died in 2002, so I'm pretty sure he wasn't partying with Epstein in 2008. https://t.co/KjHORkHCJV

That’s really dirty pool, NYT. You should be ashamed.

An additional fact: Seed definitely got some funding from Epstein!

According to Patterson's book, Epstein gave SMG $2 million in 2005. So, he was a funder (and by a larger amount than I ever knew!), but not a board member. https://t.co/vwidHiqikg

Now have to go wash my hands.

How many foreskins are you worth? » « One down