As I mentioned before in my review of Stuart Pivar’s LifeCode: The Theory of Biological Self Organization, I’m actually sympathetic to the ideas of developmental structuralism. This is the concept that physical, mechanical, and chemical properties make a significant and underappreciated contribution to the acquisition of organismal form; genes are not enough, do not carry a complete specification, and what we have to consider is interactions between genes, environment, and cytoplasm. Good stuff, all of it — and I’d like to see more work done on the subject. In my review, though, I had to point out that Pivar hadn’t actually addressed any biology, and that his modeling was little more than an extended flight of fancy, unanchored by any connection to any embryology.

Now Pivar has put out a new version of his book, Lifecode: From egg to embryo by self-organization. I’m sorry to say it doesn’t address any of my criticisms, and is even worse. This is not a scientific theory, and it isn’t even a collection of evidence: it’s a jumble of doodles. I read through it all this afternoon (there really isn’t that much to read), and I have to conclude it says nothing about the development or evolution of biological organisms, although it is relevant to something else.

What seems to be new in the book is a set of experiments, of sorts. Pivar’s model of development has long been that we achieve the diversity of organismal form by starting with a torus, and that fluid movements and distortions of the toroid form lead to the more elaborate forms at the end of development. The donut is the unifying principle underlying everything (hmmm, makes one wonder if there is a tie-in to the new Simpsons movie). So what he’s done in this work is make some flexible plastic toroidal tubes filled with fluid and flexed them and twisted them, and taken some pictures. These balloons of fluid, as you might guess, buckle and wrinkle in predictable ways — ways that, in Pivar’s interpretation, leap to be represented as morphogenetic events. A tube that is bent, for instance, makes a series of wrinkles with an even distribution that look, very vaguely, like maybe you could pretend they are segments.

So he does pretend. At length.

We already know that segmentation does not form as a consequence of responses to distortions in a tube. Primitively, it is by a sequential partitioning of new segments from an undifferentiated mass; in many insects, it is set up by patterns of interaction between genes. These are genes that are fairly well-characterized and have been found indispensable to the process; as I wrote in an earlier article, general rules like the ones Pivar is modeling do not apply, and each segment seems to be hard-coded into the regulatory logic of pattern formation. It really doesn’t matter how pretty a model might be—what counts is whether the mechanism being modeled actually exists in the organism. And no, Pivar’s model doesn’t work anywhere that I’ve seen yet.

Much of the book is filled with sketches in which he starts with something like his toroidal tubes, and then imaginatively transforms the tube into some animal. These transformations are completely unfettered by data or even the slightest familiarity with the embryology or evolution of the organism in question. Here, for instance, is a tube transformed into a polyp like creature and then into a spider.

Nothing in the development of a spider comes even close to looking like that. No evolutionary intermediates looked like that. Chelicerates did not evolve directly from some kind of collapsed coelenterate, and the intermediates don’t even make functional sense. The radial tentacles of coelenterates are not homologous to the legs of spiders. This is artistic self-indulgence, nothing more.

Even worse, here’s a transformation that makes no sense at all. He’s portraying the development/evolution of paired limbs as a process of stretching and separation of a fluid-filled tube at an attenuated midline boundary. 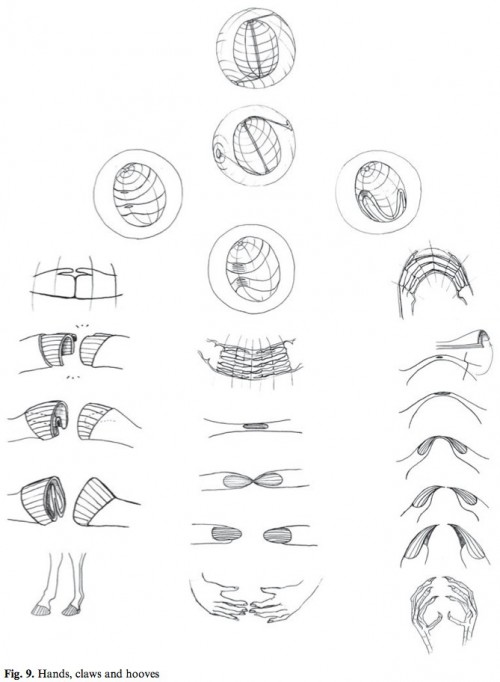 It’s absurd. Limbs don’t develop like that at all! The limbs in a pair develop independently, as protrusions and extensions from the body wall. Digits do not form by pulling left and right apart, like tugging on a string of sausages.

The doodles in this book bear absolutely no relationship to anything that goes on in real organisms, but after staring at them for a while, I realized what this book is actually about.

This book is a description of the development and evolution of balloon animals.

It’s that bad. This is a book suitable only for use at clown colleges, and even there, I suspect the clowns would tell us that it is impractical, nonsensical, and has no utility in their craft.

A good, solid, empirical structuralism based on an analysis of the mechanics and forces on real embryos would be a useful contribution and would help us to understand development and evolution. Lifecode is not that contribution. It’s not even close.

In light of the fundamental disconnect from reality represented by the substance of the book, it’s almost unfair to critique the unprofessionalism of the presentation, but it’s got to be said: it’s also terribly done. The original Lifecode was slick and glossy, at least, even if its content was abysmal; this version is a spiral bound mess, with poorly photocopied figures. The figures have no legends, and aren’t even referenced in the text; with no explanatory content at all, we’re left to puzzle over them to try and figure out what he’s getting at. The images of limb morphogenesis and chelicerate development above are as is — you have seen all the explanation there is, which is none. Almost two thirds of the “book” consists of photocopied papers and book chapters by other authors that are not related to the thesis at all, but are just plopped in. There doesn’t seem to be any unifying principle to the selection at all, except perhaps that many mention toroids and shape. This isn’t really a book at all, it’s more of a scrapbook of collected fragments.

Sentence of the Tripoli 6 commuted » « Recruiting the local unbelievers