Much credit has to go to the Portland Antifa, who turned up in numbers to mock and dissipate any action by the racists. Eric Ward summarizes the day on Twitter, as does Robert Evans, with lots of photos. It sounds like the Proud Boys rally mostly fizzled, although there was a scattering of arrests and weapons confiscated. I think the best sign that they failed, though, was that they were reduced to arguing that they won because Go look at President Trump’s Twitter. He talked about Portland, said he’s watchin’ antifa. That’s all we wanted.. Your victory is getting Donald Trump to blab some nonsense on Twitter? That’s what he does every day while sitting on the toilet.

Here’s a great overview of events from Ward: 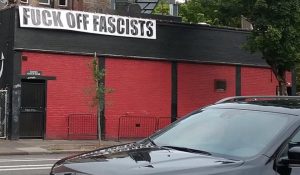 The largely non-Portland crowd was mostly abandoned by its leadership the night before. People arrived with no places to sleep and calls to cell phones went unreturned. This morning found hate group members without places to eat, water and access to restrooms. An increasing number of businesses (like the one pictured) were denying service.

The promised five hour hate rally lasted about 45 minutes; participants were forced to rally underneath a bridge and then had to beg police to escort them out (a very long walk) over year another bridge. Rally leaders then quickly took to their cars to allegedly attend a BBQ that just happened to not be in Portland.

Other remnants of the rally were forced to walk around downtown Portand for nearly two hours as they searched for their cars. I heard at least two Portlanders give them wrong directions. Tired, thirst and walked out; people started to drift away in droves, leaving a dejected looking Joey Gibson (leader of Patriot Prayer) with an increasingly smaller and smaller crowd around him. Not getting the physical confrontation he sought and contemplating his growing civil and criminal legal woes, Joey was very subdued today.

The social pressure and evolving diverse and incredibly fun tactics of PopMob; the seriousness of the Portland Police; and the number of city, civic and business leaders mobilized seems to have taken serious steam out of the white nationalist/alt right protest.

It’s clear from the speeches and comments today that White nationalist/alt right leaders are wary of the increasing civil suits led by the Oregon Justice Resource Center and criminal liabilities they are facing from disrupting communities.

Really proud of Portland today. Super impressed, from the leadership in the streets to city hall. Folks will be back to political positioning and eating each other alive tomorrow, but hope everyone gives each other a small nod of respect tonight

Keep up the pressure. It’s great when the pinnacle of success for the Proud Boys is getting a pat on the head from Daddy Trump, and nothing more.

Anyone who claims a medium is “apolitical” is lying » « The Christian Ott story is fleshed out, to the chagrin of enablers everywhere