The crazy leftists are no-platforming everyone now. Look at this magnificent work of art! 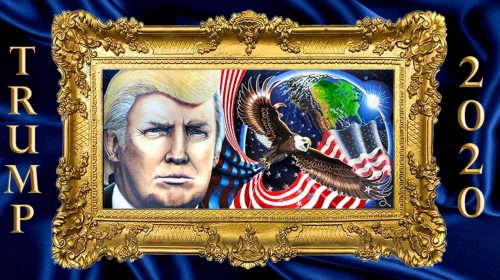 It was shown at CPAC, where everyone loved it, so it must be objectively valuable. However, when the artist, Julian Raven, demanded that the 16-foot-wide masterpiece be given space at the Smithsonian’s National Portrait Gallery, they refused. I can’t imagine why.

Raven was inspired to create the giant image in 2015 when he saw Trump campaigning on television — roughly the left third of the 300-pound painting is devoted to a giant neck-up rendering of the then-presidential candidate, with the rest depicting a bald eagle flying through space with a giant American flag in its talons and our pitiable blue planet in the background, with no idea what it had in store. Raven, driven by this searing vision to complete the painting in three weeks, hoped to display the work at the Smithsonian in coincidence with the 2017 inauguration, but found himself roundly rejected by the gallery’s director, Kim Sajet, who told him that it was “too political” and “too big” and, generally, just not very good.

“The last thing she said to me was ‘it’s no good,’” Raven is quoted as saying. Welcome to the art world, buddy.

What does a good wingnut do in such a situation? He sued, of course. His suit was dismissed, so now he’s appealing the decision.

Gee, that art director shouldn’t have said that. They were too generous — I’d have said that was a shit painting that deserves to be displayed in the dumpster out back.

Babbies! » « Stop me if you’ve heard this one before