It’s all about raising awareness of the wave of crime against Indian women. 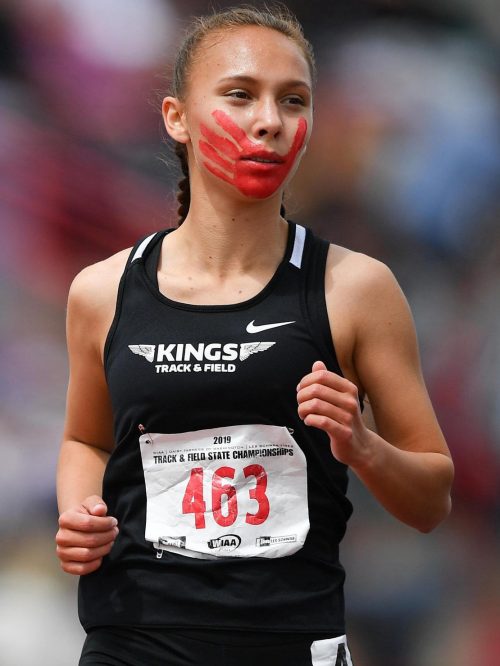 For last weekend’s Washington State 1B track and field championships, Rosalie Fish painted a red handprint over her mouth, the fingers extending across her cheekbones. On her right leg, she painted the letters “MMIW,” standing for Missing and Murdered Indigenous Women.

It’s an epidemic right now. Imagine if a town the size of Morris, Minnesota were wiped out every year…but these deaths are scattered and spread out among a neglected population.

MMIW seeks to address the issue of the thousands of indigenous women who are missing or were murdered. According to a report by the Urban Indian Health Institute, 5,712 of these cases were reported in 2016, but only 116 were put into the U.S. Department of Justice database. With 71 cases, Washington was second only to New Mexico, which had 78 cases of murdered or missing indigenous women.

I can imagine it: the reservations in Washington state are in many ways isolated, populated with poor people, but at the same time penetrated with highways and outsiders are encouraged to visit to buy cheap cigarettes or gamble, so some of the worst people from the outside are cruising through the place. Then there’s the problem of jurisdiction…if some predator is looking for prey no one with power will care about, reservations are targets of opportunity.

Hey, Canada! You too!

The thousands of Indigenous women and girls who were murdered or disappeared across the country in recent decades are victims of a “Canadian genocide,” says the final report of the national inquiry created to probe the ongoing tragedy.

The report, obtained by CBC News and verified by sources, concludes that a genocide driven by the disproportionate level of violence faced by Indigenous women and girls occurred in Canada through “state actions and inactions rooted in colonialism and colonial ideologies.”

Colonialism isn’t over yet, it seems — it’s still exacting a toll.

Steven Anderson now has something else in common with snakes » « First, kill all the professors. Second, reap the rewards of knowledge.