Yikes, after the visceral horror of mismanaged lab work, I needed a finisher of extremely cringey behavior, and the Internet provided. It’s this guy. 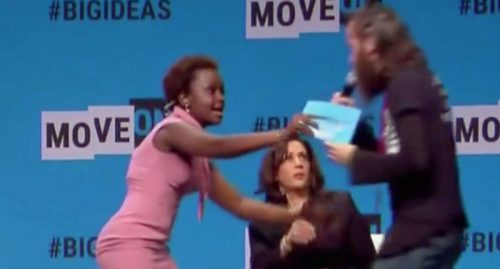 He rushed the stage at the California Democratic party convention to snatch the microphone away from Kamala Harris, because he wanted to talk about some “big ideas” — apparently, he’s concerned about extinctions, which I can sympathize with, but in this case the guy with the man-bun was inappropriate and disruptive and making his cause look bad.

I was impressed with how it was handled, though: no tough-guy threats, no violence, they just smoothly shuffled him off the stage and took him to the exit — they didn’t even press charges. I don’t know if that was a mistake, though, because the perpetrator seems completely clueless about what he has done wrong and will learn nothing from his behavior. He doesn’t even seem embarrassed, just smugly confident.

First, kill all the professors. Second, reap the rewards of knowledge. » « Laboratory nightmare!