The British Army seems to be trying to screen out dangerously demented Extreme Right Wing (XRW) individuals with a checklist. 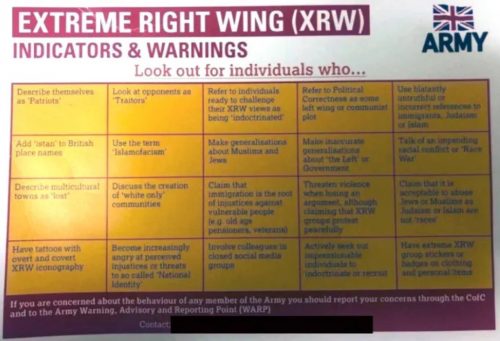 That seems like a good idea to me, and those look like common markers for bad behavior right there. I can say that, because I’d score a zero. The real right-wingers on social media sites are pissed off about it, because they conform with at least some of the items on the list.

That, though, is where I start to see problems here. If someone says they think it’s true that they “describe themselves as patriots”, but also detest the idea of “white-only communities”, are they still an XRW? Can you be 10% XRW, or is it an all-or-nothing sort of determination? Is there any weighting of the terms? Sticking “-istan” on place names is stupid, but using racial slurs and violence is far worse.

How are people supposed to use this list? It just says “Look out for individuals who…”, which is terribly vague. OK, if I, for instance, have a co-worker who does any of these things, am I supposed to report them, complain to HR, sign them up for attitude readjustment, get them fired, what?

The chief utility seems to be as a kind of meta test: print it out, show it to someone you suspect of being an XRW, see if they explode into an angry rant, which will out them as an XRW. Then what?

The British military only hints.

Addressing the ‘XRW chart’, an army spokesperson told BuzzFeed News that “robust measures” were in place to make sure they didn’t have people with “extremist views” in the armed forces.

I agree that anyone who meets any of those criteria is not very bright and is conforming to right-wing cliches, but it’s not sufficient to just wave around a list. You need to explain how to interpret the list and what actions will be taken against people who express some number of the attitudes on it.

Steven Pinker gets the treatment he has earned » « Yes, Tomi Lahren, I do think. Don’t you?