Andy Ngo, always a reliable source of hypocrisy, started a Twitter thread to document all the wicked Leftists who expressed joy at the burning of Notre Dame. It’s bizarre, because many of those Leftists are making legitimate points. France led a colonial empire, but we don’t see as much grief for the murdered and exploited peoples. Jerusalem’s Al-Aqsa mosque was burning at the same time, and got only a tiny fraction of the attention. Notre Dame is the responsibility of the French state, and there has been bickering for years about the cost of maintenance with the Catholic Church, yet the church still uses it for religious services. Catholicism is an odious cult, yet it gets treated with unwarranted respect (again, Notre Dame’s historical value is preserved by the French Republic, yet this is treated as a loss for Catholicism). Americans demolish Indian lands to build ugly monuments or dig mines, but there’s rarely an outcry about disrespecting their history (well, Indians cry out; we rarely pay any attention).

It’s complicated. I think it’s important to preserve European historical sites, but I feel the same about Native American sacred sites and the Sultan Ahmed Mosque and Jagannath Temple and Borobudur and a thousand other places, even when I have little cultural connection to them and may even detest the religion that drove their construction. Human history is full of majestic accomplishments, but they’ve all got warts on them. We’ve got to appreciate the good behind them, but never forget the warts. A tragedy like the Notre Dame fire occurs, and people rush to both deify and demonize the building — let’s try to have some perspective, OK?

I sympathize with the people who feel some schadenfreude at the destruction of one artifact that represents crimes against humanity at the same time that it represents a great human achievement. I don’t mind them reminding us all of the badness that lurks within that monument — I’d do the same. As long as you’re tolerant, no matter how angry you are, and not plotting active destruction yourself, I can respect that.

The interesting thing about Ngo’s thread, though, is that, as you might expect, it’s drawn out the right-wing hypocrites. They’re all deploring how hateful the Left is for expressing a personal dislike of Catholicism, or French imperialism, or thinking it’s only fair that France feel the kind of loss other nations have felt. But they’ve got their own rabid bigotry that they overlook. 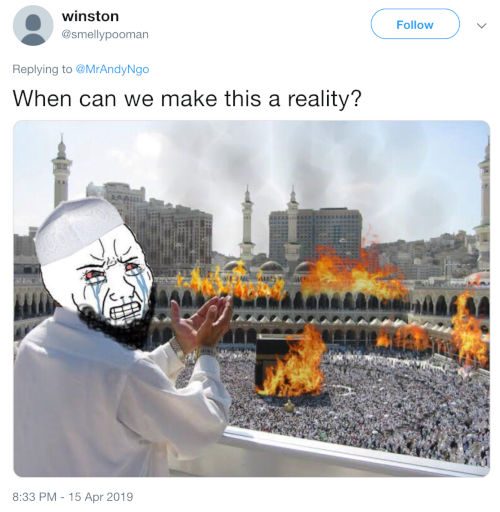 You know, Al-Masjid Al-Haram is even older than Notre Dame. If you’re calling for its destruction, you aren’t motivated by an appreciation of history or art, but by simple ideological vengeance. Then you don’t get to complain when people have an ideological contempt for Notre Dame.

Or how about this delusional threat? 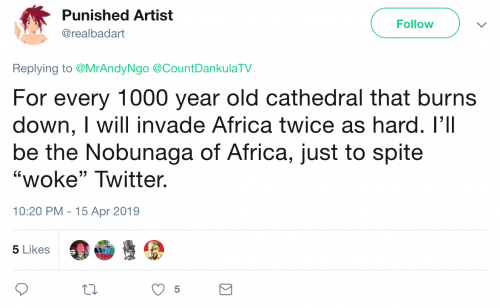 He, personally, is going to invade Africa. All of Africa. This vast continent, with a deep history and thousands of complex cultures, is responsible for burning European cathedrals, and he is going to march over there and spank everyone. His reason? To spite people on Twitter he doesn’t like.

Mr Ngo wanted to expose wicked Leftists, but ended up holding a mirror to his own clique.